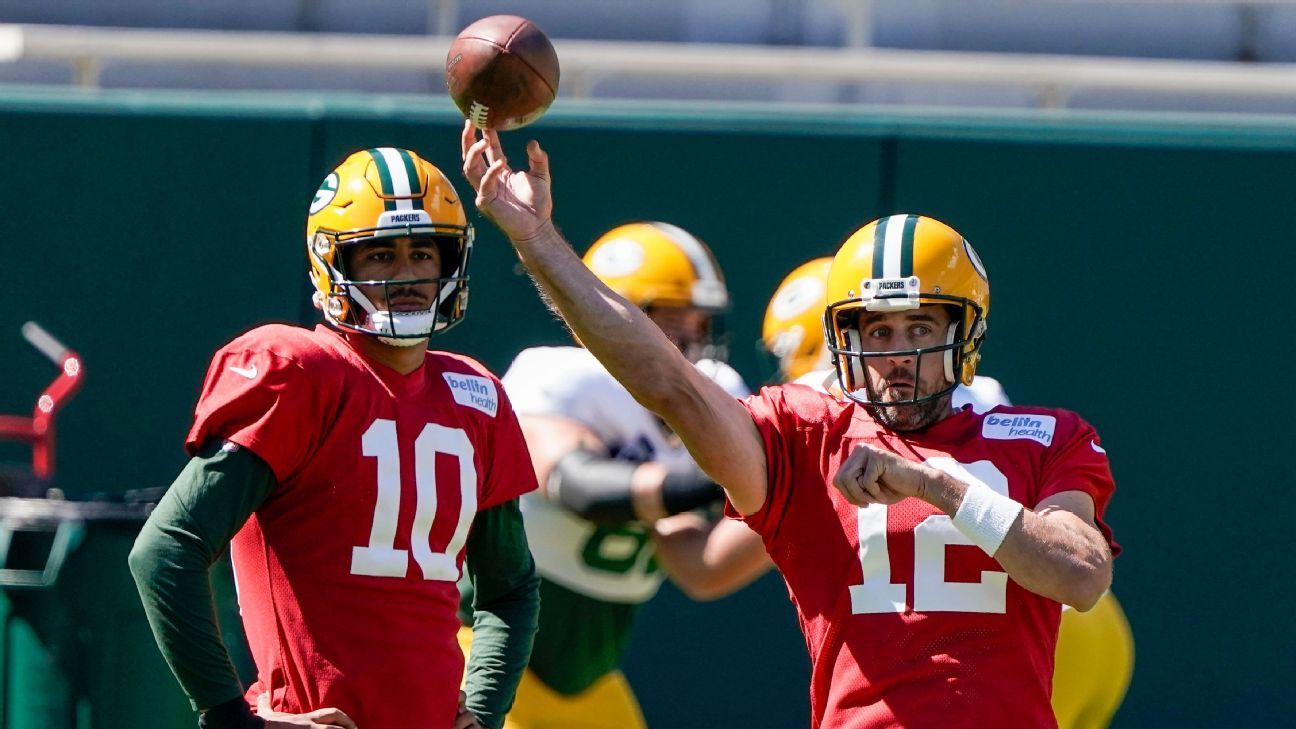 GREEN BAY, Wis. — The Green Bay Packers say they’re not trading quarterback Aaron Rodgers, who has told them he’s not interested in returning to the team.

That all came to light Thursday, hours before the first round of the NFL draft, when ESPN’s Adam Schefter reported the intimate details of Rodgers’ disgruntlement.

What’s changed other than a few conversations between the two sides?

A high-ranking team official replied to that query with a question: “Have you gotten our quarterback to come back yet?”

With that in mind, here’s a look at some of the questions facing Rodgers and the Packers as they try to work toward a solution:

What did the Packers think was going to happen when they drafted Jordan Love?

Immediately after the Packers traded up to take Love last year at No. 26 overall in the 2020 NFL draft, a source who has known Rodgers since the quarterback came into the NFL in 2005 said Rodgers would be “irate” over the pick but would not take it out on Love like Brett Favre initially took it out on Rodgers.

Rodgers did not shut out Love like Favre did at the start (remember Favre’s memorable quote: “My contract doesn’t say I have to get Aaron Rodgers ready to play. Now hopefully he watches me and gets something from that.”)

But this has been percolating ever since. Two weeks after the 2020 draft, Rodgers said he was “not thrilled by the pick” and admitted his “sincere desire to start and finish with the same organization … may not be a reality at this point.”

The same source who has known Rodgers his entire career also predicted the Love pick would light a fire under him. That also held true as Rodgers went on to win his third NFL MVP award, throwing 48 touchdown passes and leading the Packers to a second straight NFC Championship Game.

Perhaps that shifted the balance of power back toward Rodgers, who seems to feel empowered this offseason to regain control of his future.

With whom does he have issues?

It would appear that fourth-year general manager Brian Gutekunst is the target of his disdain. It was Gutekunst’s call on Love, though team president Mark Murphy surely could have tried to talk his GM out of the pick if he felt strongly enough that it was a mistake.

The mistake, however, may not have been drafting Love. After all, a GM’s job is partially to ensure long-term stability. If Gutekunst felt Love would give the Packers continued quarterback success for another decade-plus, then why not?

He erred, however, by not including Rodgers in his thinking beforehand. Even the Minnesota Vikings, according to ESPN’s Courtney Cronin, reached out to Kirk Cousins to let him know they might take Kellen Mond in the third round last weekend.

Gutekunst proved more active in free agency than his predecessor Ted Thompson, who frustrated Rodgers by his inactivity in that market, but angered Rodgers in other ways. He released receivers Jordy Nelson and Jake Kumerow and agreed to hold joint practices with the Texans in the summer of 2019, which Rodgers loathed.

It was telling that Murphy wrote in his monthly column on the team website published on Saturday the “relationship that Aaron has forged with [coach] Matt LaFleur and the other offensive coaches has propelled us to the brink of the Super Bowl in two straight years” but made no mention of the Rodgers-Gutekunst relationship.

How can they appease Rodgers?

Short of removing Gutekunst as GM, there might not be much Rodgers would find acceptable, given he’s already turned down a lucrative contract extension, according to Schefter. Yahoo! Sports reported over the weekend “a reconciliation may not be possible if Gutekunst remains.”

Nothing in the Packers’ history of doing business suggests they would remove Gutekunst.

For his part, Gutekunst has taken steps to try and win Rodgers back. He said over the weekend he would welcome input from Rodgers on personnel decisions but added, “That’s not new. That’s not unique.”

Would trading Love do it? Perhaps if the Packers did what the Patriots did with Jimmy Garoppolo (dealing him to the 49ers), then Rodgers might return. But the Packers likely would lose big in that trade, having invested a first-round pick in Love. Unless a team loved him coming out, nothing he’s done since — he was the third-string, inactive quarterback all last season — would drum up any new interest.

Rodgers is under contract through 2023 but does not have any more guaranteed money on the deal. At one point, according to Schefter’s sources, that’s what Rodgers sought. But by the time the Packers got around to offering that, it was too late.

What if Rodgers refused to show?

The only thing mandatory between now and the start of training camp is the three-day minicamp in June.

Article 42(b) of the Collective Bargaining Agreement says “unexcused failure to report to or unexcused departure from mandatory offseason minicamp [carries] a maximum fine of $15,515 for the first missed day, $31,030 for the second missed day and $46,540 for the third missed day.” A player who misses all three days would be fined a total of $93,085.

Jeremy Fowler lists off some teams that could look to acquire Aaron Rodgers via trade, including the Broncos, Raiders and Seahawks.

It gets even more expensive come training camp. There is a “mandatory fine of $50,000 per day, plus one week’s Paragraph 5 [base] Salary for each preseason game missed.” The CBA also states that those fines “shall be mandatory, and shall not be reduced in amount or waived by the Club, in whole or in part, but must be paid by the player or deducted by the Club.”

If Rodgers retired, the Packers could attempt to recoup the unamortized portion of his signing bonus, which would total around $30 million. He also would be walking away from a $14.7 million base salary and up to $850,000 in “likely to be earned incentives” this season. Rodgers, who has made $242 million in his NFL career, has already put his $500,000 workout bonus in jeopardy by skipping the virtual portion of the offseason program, which began two weeks ago. Players typically must attend 80% to 90% of the offseason program to achieve their workout bonuses.

Did teams tamper with Rodgers?

The Packers are upset teams may have contacted Rodgers to gauge whether he’d be interested in playing for them if they tried to make a trade, sources said. Rodgers does not have a no-trade clause in his deal. The 49ers and Broncos are believed to be among those teams.

A league source said the Packers have not filed charges with the NFL because they know it’s nearly impossible to prove. The Packers found that out when they filed a charge against the Vikings in 2008 for tampering with Favre.

What could Green Bay get in a trade?

One high-ranking personnel executive with an NFC team put the value at two first-round picks and a second-rounder. He estimated that Rodgers has four good years left in him. Check out Bill Barnwell’s trade proposals here.

How would it impact the salary cap?

Now that they didn’t make a move before the draft, when they could have gotten immediate help, there’s no point in doing anything until after June 1. They would save $16.050 million in salary-cap space if they traded him (or released him) after that date. A move now would actually cost them a little more than $1 million in space. A move made before June 1 would accelerate his remaining signing bonus proration to the 2021 cap. A move after would divide it up over the last three years of his deal.

Not even the Packers know.

“Obviously we think the world of Jordan and where he’s going to grow and develop,” Gutekunst said after the draft. “I think it’s pretty early to kind of be able to tell you that because obviously with no preseason games last year and just kind of the no spring, but we have a lot of confidence in his talents, in his work ethic and where he’s going to go. But it’s a little early for that.”

It was never the plan to turn things over to Love before 2022, which is why they brought him along slowly and let him learn as the No. 3 quarterback last season behind Rodgers and Tim Boyle.

How much better is Boyle than when he left Green Bay after the season?

“That’s really tough to tell because he hasn’t been back here,” LaFleur said.

Boyle signed with the Lions in free agency, so the Packers might have to explore options for a veteran to bridge the gap between Rodgers and Love.