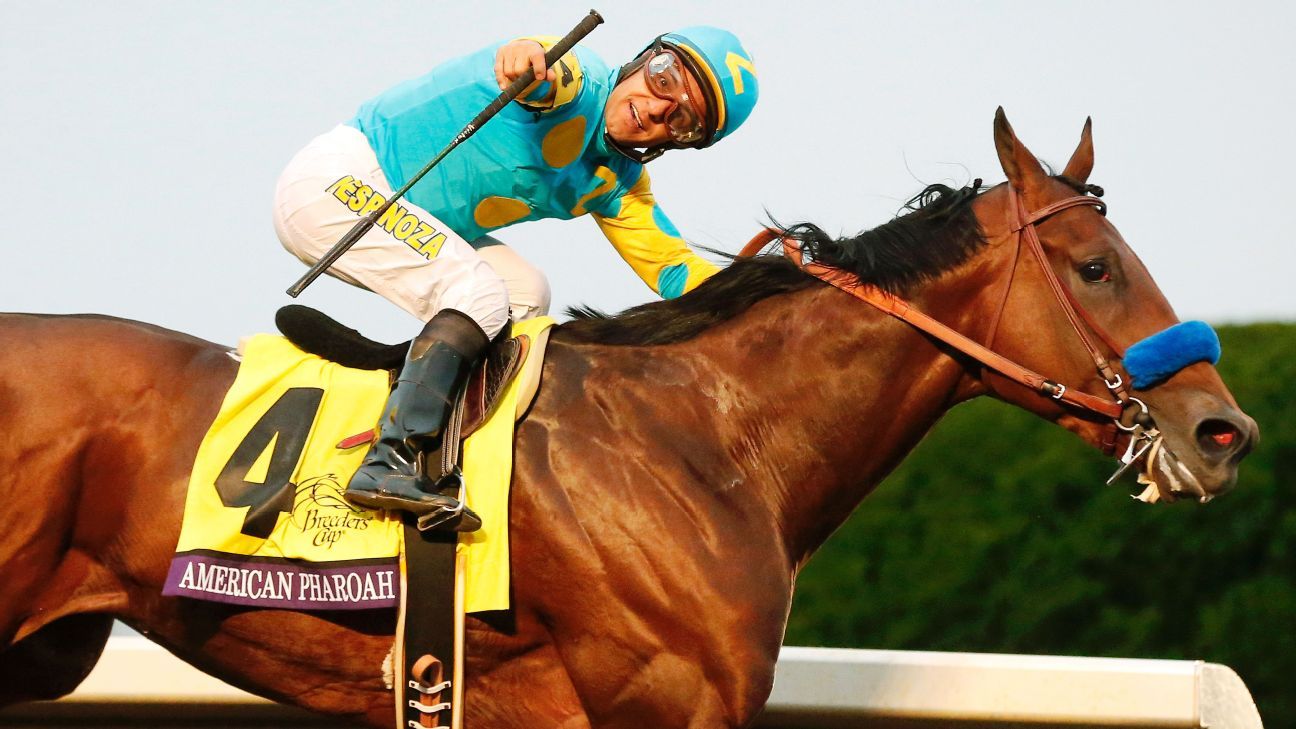 SARATOGA SPRINGS, N.Y. — The highlight of Bob Baffert’s Hall of Fame career as a thoroughbred trainer happened six years ago. Nothing else comes close.

“Winning the Triple Crown with American Pharoah was the greatest sports moment of my life,” said Baffert, fresh from winning his seventh Kentucky Derby. “It was so emotional and such a terrific thing for racing. He deserves all the accolades he gets.”

American Pharoah ended racing’s 37-year Triple Crown drought when he swept the Kentucky Derby, Preakness Stakes, and Belmont Stakes in 2015. A bay colt bred in Kentucky by owner Zayat Stables, American Pharoah went on to win the Haskell Invitational and Breeders’ Cup Classic. Coupled with his victories earlier in the year in the Rebel Stakes and Arkansas Derby, he was voted Horse of the Year and Champion 3-Year-Old Male for 2015, a year after he was crowned as the top 2-year-old.

“He’s certainly among the all-time greats. I don’t think there is any question about that,” Baffert said in a release from the Hall of Fame. “He did everything so effortlessly and with such class. The way he moved, his mechanics were absolutely flawless.”

Since he struck out on his own after breaking into the thoroughbred racing business as an assistant for D. Wayne Lukas from 1989-95, Pletcher has won 60 individual meet training titles and, according to Equibase data, has won 708 graded stakes, including 166 Grade 1s.

“I’m really humbled to be elected to the Hall of Fame. It’s an incredible honor,” Pletcher said. “Training horses is all I ever wanted to do. I remember being 11 or 12 and telling my mom I wanted to train and she said it was wonderful. From that point on with her endorsement I never thought of doing anything else.”

Fisher, 57, won his first race as a trainer in 1988 at Middleburg, Virginia, and has been a dominant force atop the National Steeplechase Association standings for the past two decades. Fisher has 593 career steeplechase victories, ranks second all-time in purse earnings with more than $17.8 million, and is the only trainer in steeplechase history to surpass $1 million in purse earnings in a year, something he’s done five times.

“I was terrible in school and didn’t want to be there. I loved riding and I love training,” said Fisher, whose father, John, also was a trainer. “I’ve had some wonderful and patient owners and great talent in the barn. I’m pretty darn lucky.”

American Pharoah and Pletcher were selected in the contemporary category in their first year of eligibility. Fisher was chosen by the museum’s steeplechase review committee, which meets once every four years.

The class of 2021 will be enshrined Aug. 6 in Saratoga Springs, New York, along with the 2020 inductees: trainer Mark Casse; jockey Darrel McHargue; thoroughbreds Tom Bowling and Wise Dan; and Alice Headley Chandler, J. Keene Daingerfield Jr. and George D. Widener Jr. in the “Pillars of the Turf” category. Last year’s induction ceremony was canceled because of the coronavirus pandemic.

The ceremony this year will be broadcast live on the museum’s website. An announcement regarding public attendance will be made later.