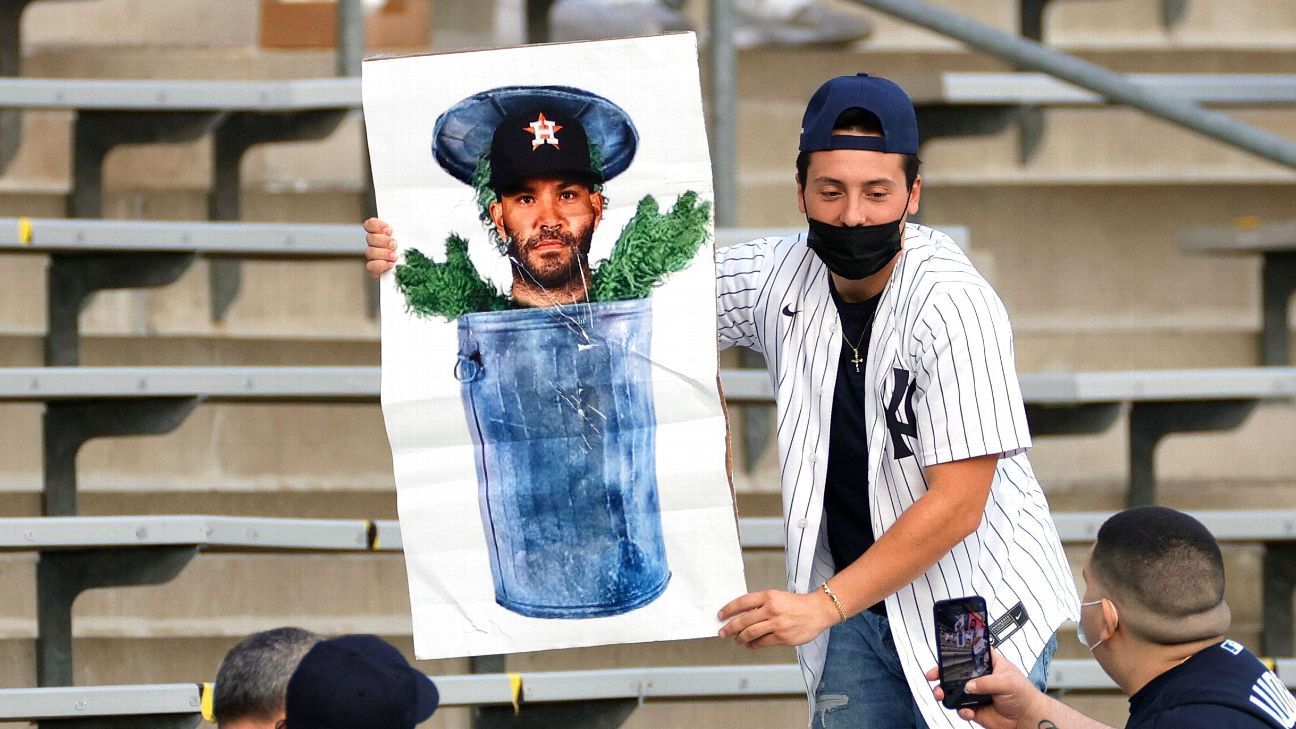 Many New York Yankees fans spent the pandemic searching for an outlet to express their anger over the trash can-banging scheme of the Houston Astros. On Tuesday night, with Houston making its first trip to the Bronx since news of the scandal broke, fans finally had their chance to rain boos down on the 2017 World Series champions.

Here are the stories behind some of the signs and sights from fans, who were finally able to express the resentment that has boiled up over the past year in quarantine. It didn’t hurt that New York won, 7-3.

Jack Turner (pictured left): “They got away with no fans last year, but New York is coming out tonight. New York never forgets.”

Jack Genesi: “It’s a collective hate against the Astros and it definitely even goes deeper into the integrity of the game. They affected a lot of players outside of them cheating. It goes deeper than just winning the World Series. We brought a trash can lid that they took away at the game because they said it could be used as a weapon.”

“We want to beat the cheaters”

Chico Heano: “It’s plastic [the trash can necklace] and security let me have it. That’s what they were doing when they were getting signals when they were playing, so we wanted to show that we can do signals too. I come here every night and every game but I had to be here tonight for sure because we want to beat the cheaters. We got it from a store that was selling them. I got it in some place in the Bronx. Some girl got it for me.”

A passionate Yankees fan wears an Oscar the Grouch costume complete with trash can so he can bang on it while the Astros are batting. Sadly, the fan was not allowed into the stadium with the costume.

David Taub (pictured at center, holding sign up): “The costume came from Amazon. It was about $90 and I ordered it and it was three weeks in back order so I made sure to order it early. I had this game penciled in for a long time. Since the schedule came out. I have been waiting to go to this game for over a year and a half, waiting for the Astros to come.

“I was waiting on line and they had a new policy that came today. I actually came on Sunday. I showed the manager a picture [of the costume] and he said I could bring it. I paid a lot of money for the costume. I came in today and they said they had a new policy and that they couldn’t allow costumes in and they made me leave the line and remove it. It’s hiding right now in the grass. I hid it somewhere around the stadium.”

Alvin Aquino: “The first time, they told us that we have to deflate it or they are going to kick us out of the ballpark. The second time, I went to get a drink and somehow she inflated it. I came back and security told us again that we couldn’t do that. My girlfriend is a f—ing crazy Yankee fan. Security brought the manager. We got it back and they told us to deflate it in front of him. She’s the MVP. … She snuck it in.”

Rivera: “They couldn’t tell me anything. I could’ve been pregnant, but I’m not that fat.”

Aquino: “I wish I had brought my Altuve stuffed doll because I wanted people to throw it in there.”