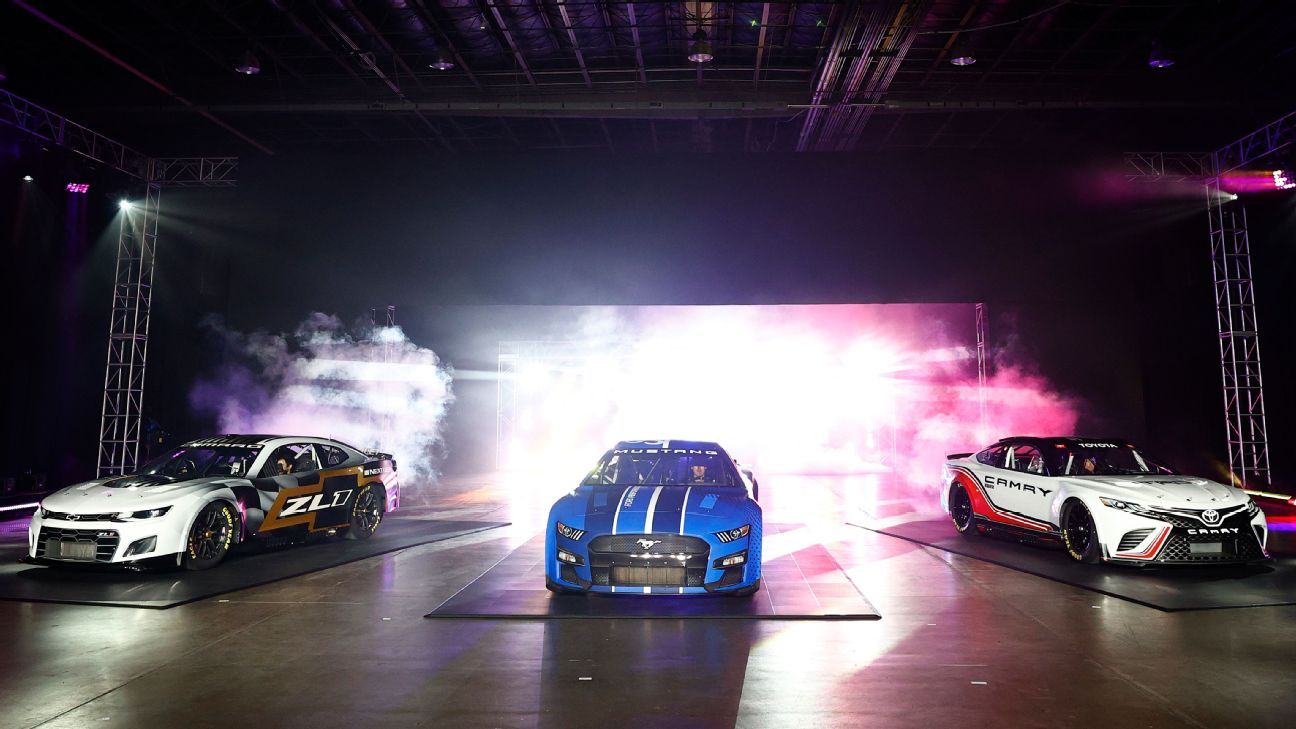 CHARLOTTE, N.C. — After two years of waiting and with ten months still to go before its on-track debut, NASCAR’s pandemic-delayed Next Gen race car was unveiled Wednesday afternoon in Charlotte. A Chevy Camaro, Ford Mustang and Toyota Camry were rolled out amid rock concert lighting and smoke, their faux headlights pointed toward the 2022 Daytona 500.

“After so long talking about it and working on it it’s a little surreal to see it actually sitting there, isn’t it?” defending NASCAR Cup Series champion Chase Elliott said as he stood alongside his white, black and gold Camaro ZL1, clearly adorned with the pony car’s signature nose and flared rear fenders. “This is a racy-looking car. Now let’s hope it races as good as it looks.”

NASCAR is hoping for that and much more. Sanctioning body president Steve Phelps said plainly: “The importance of this car for our sport as a whole, it cannot be overstated.” In addition to side-by-side racing, NASCAR hopes that these cars will be cheaper to build and maintain, constructed with “standardized parts.”

For the first time in NASCAR’s 73-year history, teams’ chassis will be built using manufacturer-sourced parts. The carbon composite bodies bolted atop those chassis will be supplied by the three car makers who have worked so hard over the last two years with NASCAR — and more amazingly, each other — to design bodies that might achieve the dual goals of, in the words of Toyota Racing Development USA president David Wilson, “racing as hard you possibly can in a car that looks as much like its street companion as it possibly can.”

That’s what the three drivers in attendance — Elliott, Denny Hamlin, and Joey Logano — were obsessing over at Wednesday’s announcement, frequently pausing in the middle of interviews to gawk and point at each ride’s identity markers. Meanwhile, Wilson and his colleagues from Ford and Chevy chattered giddily of lowered rooflines, cut noses, beautiful greenhouses and rear tail styling.

“It’s real car talk,” Logano added with a point to his Mustang. “Because it looks like a real car.”

Today, most real cars don’t run around town using high fuel octane-eating V-8 engines. That’s why NASCAR itself seemed to be most excited about this car well beyond 2022. That’s why the cars that were rolled out Wednesday weren’t classified like their chronological predecessors. By that measure, they would have been called Generation 7. Instead, they carry the Future World-worthy moniker of “Next Gen.” NASCAR’s stated goal is to make these rides as “future proof” as possible.

As hybrid and electric vehicles increase their presence on the street, the sanctioning body hopes this car is adaptable enough to roll with that ever-changing technology. While no one should expect to see 40 electric cars running around Talladega anytime soon, Next Gen is built to be hybrid-friendly when that time inevitably comes. NASCAR hopes to leverage that adaptability to recruit new manufacturers into the stock car racing fold to its current three longtime pillars of Chevy, Ford and Toyota.

They also hope to lure more new team owners into an increasingly aging garage. Right now, that’s a tough sell because of the cost of doing business. (See the famous quote from NASCAR titan Rick Hendrick: “How do you make a small fortune in NASCAR? Start with a large one.”)

But current team owners, nearly all of whom were in attendance for Wednesday’s announcement, say that the “standardized parts platform” model of the Next Gen car (whatever you do, don’t call it “spec”) could cut team personnel rosters by as much as half, as they will no longer need teams of parts design engineers, chassis builders and sheet metal fabricators.

NASCAR says that the Next Gen’s one-car-fits-all-tracks ability will eliminate the need to build performance-specific models for each different type of speedway. Currently, Cup Series teams might build dozens of cars for one driver during a single season. In the Next Gen era, NASCAR says they will only need seven.

The hope is that the math will look like this: Smaller staffs + smaller payrolls + smaller cost of manufacturing = a much more attractive business model for anyone who wants to go racing.

“On paper, it looks like a great window for someone who might have looked at starting a race team a few years ago and walked away because it made no financial sense,” explained Hamlin, who is a rookie team owner this season, founding Team 23XI Racing with Michael Jordan while he still drives for NASCAR juggernaut Joe Gibbs Racing. “We will see if that is how it works out. But there is certainly a lot of potential. A lot of promise for the future.”

Hamlin, the three-time Daytona 500 champion, interrupted himself to once again look at the 2022 Next Gen Toyota Camry parked to his left. “Now we just have to get it out on a racetrack and see what it can do,” he said.