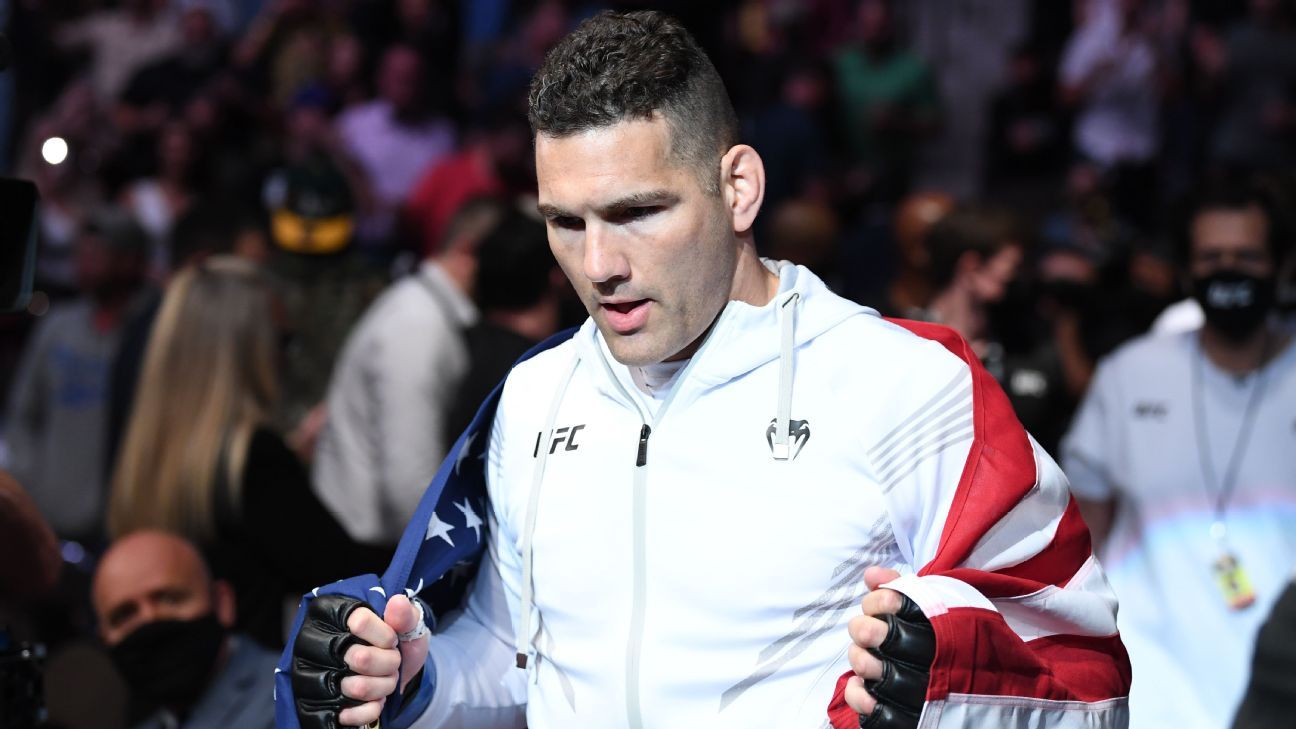 Ten days after suffering a compound fracture of his right leg, Chris Weidman was at home in New York and preparing for a long road to recovery, saying the pain was unlike anything he had felt in a career that has had its fair share of injuries.

“I’ve had 10 knee surgeries, three elbow surgeries, two neck surgeries, three hand surgeries. I’ve had pretty much everything you could possibly have,” Weidman told ESPN’s Ariel Helwani in an interview released Wednesday. “The amount of pain when I got up from having my leg up above my heart, when I was putting that leg down — not actually putting weight on it, but just getting on crutches and going to the bathroom — was so bad. The pooling of blood in my shin and my foot was just so terrible. … I was literally sleeping all day long — the only time I was moving really was to go to the bathroom. And those moments were just terrible, literally like crying and pain.”

Weidman suffered the injury while kicking Uriah Hall‘s leg shortly after the start of their fight at UFC 261 in Jacksonville, Florida, on April 24. Weidman’s leg wrapped unnaturally around Hall’s calf, and when he took a step backward, Weidman collapsed under the weight and part of his bone went through his calf.

“I remember hitting him with the shot, and the first thing that went through my mind was, ‘That was a super hard leg kick. He’s not taking more than one or two of those,’ like that had to have hurt him,” Weidman said. “Then, secondly, I looked up at his eyes, and I saw him have almost like a poker face on. … I know that had to hurt. And then, apparently, I stepped back. And that must have been when I looked down and I got the visual of my leg flopping around. I don’t remember stepping down. But I remember seeing my leg, you know, rubbery.”

As the medical team entered the Octagon, one thought that popped into Weidman’s head was of Anderson Silva suffering a nearly identical injury at UFC 168, against Weidman himself.

“When I was face down, I think that immediately popped in my head — like, is this a bad dream? How is that possible?” Weidman said. “I was a part of it when it happened to Anderson Silva, and this happens to me? … Like, how the hell does this happen? Three leg breaks in the history of the UFC, and I’m a part of two of them?”

Having been through the injury, surgery and recovery process numerous times, Weidman thought he knew what he was in for but said this was unlike anything before.

“Initially, I was super optimistic, because after surgery I just figured it was going to be three, maybe four days’ worth of pain and then I’d be kind of back into it,” Weidman said. “I’ve had 23 surgeries, so it’s not like it’s my first rodeo going through a surgery. But I didn’t realize how different this was. When compared to every other surgery, this was a serious, traumatic thing that happened in my leg.

“Recovery’s going to be way longer and harder than I’ve ever experienced. I went through a tough time about the four- or five-day mark post-surgery, because it started going the other way. It started becoming more painful, as opposed to getting better. And it was just so excruciating, to just get up for me to crutch my way to the bathroom. I would talk myself into it. I had to amp myself up and mentally prepare myself just to get to the bathroom.”

Weidman eventually reached the point where he could sit on the couch and play video games, as long as his leg remained elevated. He began physical therapy sessions Tuesday, although it’s only for consultation and getting comfortable in the early stages.

As far as thoughts of a comeback, Weidman said he is hopeful but realistic. Since losing the UFC middleweight title in 2015, Weidman has fought only once per year with the exception of 2017. He has had a long road to recovery multiple times, and this could be Weidman’s toughest to date.

“I was in a very good spot physically, mentally, spiritually. Had some big goals I was ready to accomplish, and I cannot believe this happened to me. … It’s just so frustrating,” Weidman said. “I don’t know how much work it’s going to take, but yeah, this is what I want. I just know how good I am. And I want to be able to prove it. And I don’t have many more years left of being able to do that. My body never felt so good before this fight. I really was excited to show the world how good I am able to put it out there.

“If I can get my body back to where I feel like I’m that guy again, I 100% want to fight. I want to be able to demonstrate the talents I have, put on a show and then also be able to inspire people by coming back from this. It is not going to be easy. It’s way, way tougher of a recovery already in the first 10 days.”