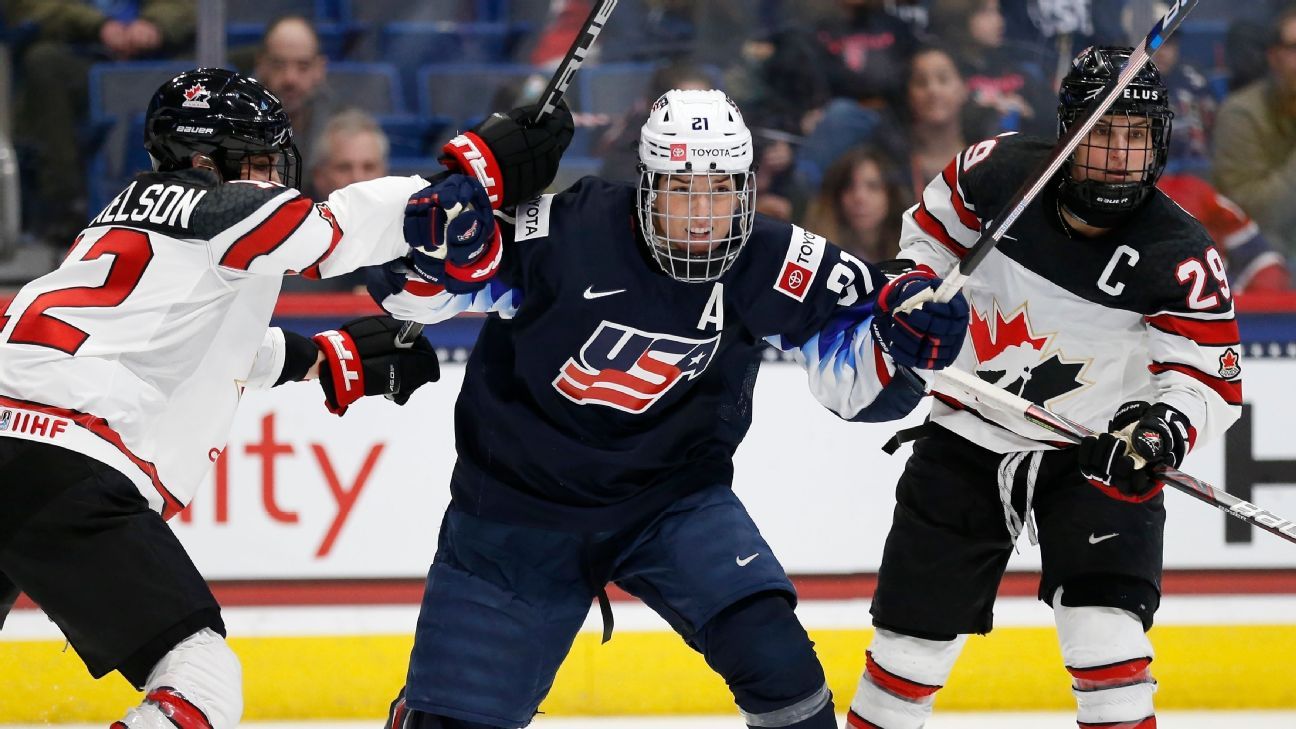 When the IIHF Women’s World Championships in Nova Scotia were abruptly canceled on April 21 — just one day before Team USA was supposed to travel to Canada — many players felt it was another case of women’s hockey being treated as an afterthought.

“A lot of people have asked, do you think this is a case of women versus men, what women get versus what men get?” U.S. veteran forward Brianna Decker said. “I’m not one to always turn to that; I don’t draw conclusions, I don’t speculate. But in this situation, this never would have happened if it was a men’s tournament. They would have already had a Plan B, and made it happen somehow.”

The decision was made by the Nova Scotia government due to rising COVID cases in the province. In a letter to “the women’s hockey family” on April 23, IIHF president Rene Fasel had this to say:

“There have been some requests for an explanation as to why the IIHF did not have a contingency plan in place should the tournament be canceled. Aside from the fact that up until Wednesday the IIHF had no reason to believe that the province of Nova Scotia would cancel the tournament in Halifax and Truro based on the ongoing discussions and tournament preparation, the logistics of keeping a venue as a ‘backup’ is not a workable solution. For instance, keeping spare hotels for exclusive use for the event booked, staff and two arenas that are up to the IIHF standard of a ten-team World Championship event — in an entirely different province or country in case of a cancellation in the main host region — is just not possible from an expense and logistical perspective.”

Organizers have since announced the contingency plan for late August, at a location in Canada yet to be determined. But the disruption and uncertainty hasn’t been easy for players. They all committed to taking a month away from their jobs and families for a bubble-like environment. Now they have to go through an acceleration of training, while navigating strict COVID protocols, once again.

“Our whole year has just been facing adversity nonstop,” veteran U.S. defenseman Kacey Bellamy said. “It’s at a point now where nothing fazes us and nothing surprises us, and whatever hand that we’re dealt, we have to deal with. And if we complain? Then we get judged, and it’s really sad.”

Professionally, there isn’t a women’s league in North America that pays players a living wage. So the sports’ top players look forward to international competitions as their biggest stage.

While players are conscious that the swerve on this year’s championships was a government and health decision, they were upset by the way it unfolded: because a gender disparity already exists. From infrastructure to resources to promotion, the stage is far from even.

While the gender gap already existed in hockey, the pandemic has widened it even more.

The IIHF is a non-profit, whose mission statement is “to promote ice hockey throughout the world.” According to the IIHF, part of that role includes to “govern, develop and promote men’s and women’s ice hockey, in all forms and at all ages.” But the treatment of men and women’s games isn’t exactly the same.

The discrepancies are apparent. The men are put up in four- or five-star hotels, while it calls for four-star hotels for the women. Men are given more comp tickets (45 versus 29 for the women). The men get prize money for their tournament; the women do not.

“The men have a guest fund and they would have one guest paid for — all expenses, hotel, travel — and we recently received that a couple years ago,” Bellamy said. “That’s because we fought for it. If it wasn’t brought up by us, that wouldn’t be the case today. It was nice to have my mom at the last couple championships, being paid for and everything, so she didn’t have to worry about using her own money. It’s a small thing, but it goes a long way.”

The argument that organizers make for a lot of these disparities is that the men’s tournament brings in more money. There is more media and fan interest. But it’s the same chicken-or-egg conversation in women’s sports generally: are they less popular because there’s less visibility or is there less visibility because they are less popular? And how hard is the IIHF working to market and promote the women’s game? How hard are governing bodies working to get TV contracts and more exposure for the women?

The answer comes down to infrastructure — and if it were evened out, we could see the true value of each sport.

The IIHF congress gathers at every men’s world championships, a meeting of roughly 200 delegates to discuss all matters of international hockey. The IIHF has never hosted its congress at the women’s world championships, meaning that many of those delegates aren’t being exposed to the women’s game, or recognizing it as a marquee event on the calendar.

In many ways, the senior-level women feel that even the under-18 men are treated better than they are. Many women pointed to the fact that the 2021 under-18 men’s world championships were pre-emptively moved months in advance from Michigan, due to the state’s COVID situation, while the same caution wasn’t taken for the women’s tournament, despite Nova Scotia being notoriously strict on COVID rules throughout the pandemic.

The treatment from governing bodies isn’t exactly the same, either. The NHL and USA Hockey help fund the USHL as a development league, something that doesn’t exist in the women’s game. There is also a U.S. National Team Development Program for the boys’ side — which trains together during the year in Michigan — but there is no similar program for girls. The USNTDP has its own social media accounts; the women’s senior national team does not.

“The U18 boys’ world is going on now, and they’re all wearing the fresh equipment. And I’m wondering, do they get to keep that stuff, or do they have to give it back?” Decker said. “I remember, we had to give ours back, it was just like we were borrowing U.S. equipment. That’s a fact I don’t know, if they get to keep it, but they’re also the ones training at the NTDP and being able to get all of those resources.

In March, 2020, the world shut down due to the COVID-19 pandemic. For a brief moment in time, all hockey players were in the exact same position. They were confined to home; they couldn’t go to the rink, and they couldn’t play the game they loved.

“At the beginning of the pandemic we understood how much it affected everyone,” Bellamy said. “We were all kind of in the same boat, nobody was playing. Over time, you see little by little plans being put into place for the men’s side, and now here we are over a year later and the women haven’t really changed from where we were a year ago.”

The biggest issue has been programming; there hasn’t been an international senior-level women’s event in two years.

The Professional Women’s Hockey Players Association — a group that’s fighting for a sustainable professional league that pays players a living wage — has still forged on. They staged the first-ever pro women’s hockey game at Madison Square Garden in February.

“But it feels like we got to play at Madison Square Garden because there were no fans, because we weren’t talking about revenue and income and how much attendance there’s going to be,” Bellamy said. “So here’s the rink, because the NHL teams are playing without fans, so here you go.”

What makes it all the more frustrating is that right before the pandemic, there had never been more momentum for the women’s game.

In January, 2020, the NHL invited some American and Canadian players to its All Star weekend in St. Louis. Kendall Coyne-Schofield became the first woman to participate in an NHL All-Star skills event — the fastest lap — while the league also gave the women their own event, a 3-on-3 showcase. It felt like a tangible leap forward, and a sign the NHL was ready to truly invest in or partner with the women’s game.

And then there was a lull.

“If it wasn’t for the pandemic, we would have had a lot more NHL support this year going into the PWHPA season,” Decker said. “We do realize how much of a hit the NHL took. And being an Adidas athlete as well, I know it was tough for Adidas having those NHL buildings closed, not being able to have fans. I just felt like we would be able to kickstart something we’ve been working for. I’m sure we’re not the only women’s sport that’s taken a big hit during the pandemic. Hopefully we get back on track soon. I think the NHL is interested in hopefully helping us down the road, and that’s what we need, their support.”

In the meantime, the women’s players are scattered at their homes after last month’s abrupt cancelation. At first, Bellamy said she had “low motivation” — continuing to train for an event she wasn’t sure would even happen at all. She’s not alone.

“The last two years we haven’t been playing, there’s a lot of great players in their prime right now,” Bellamy said. “Dekks came back from an injury, and she hasn’t been able to showcase her skill to the world. I’ve seen it the last couple camps, and she’s by far improved her game tremendously. It’s sad that it can’t be showcased, and it’s a shame.

“I feel like women’s hockey has taken step backs due to this pandemic, and I don’t know how much we’re going to take these steps forward in the future. Where we were even before the pandemic, we should have been 10 years ago. But right now we’re back where we were 10 years ago.”

Many of the women have resumed training, because now they now have a tournament in August in which they want to show off the best they have to offer. They will be ready — because they’ve faced adversity before, and will continue to fight for an even playing field.