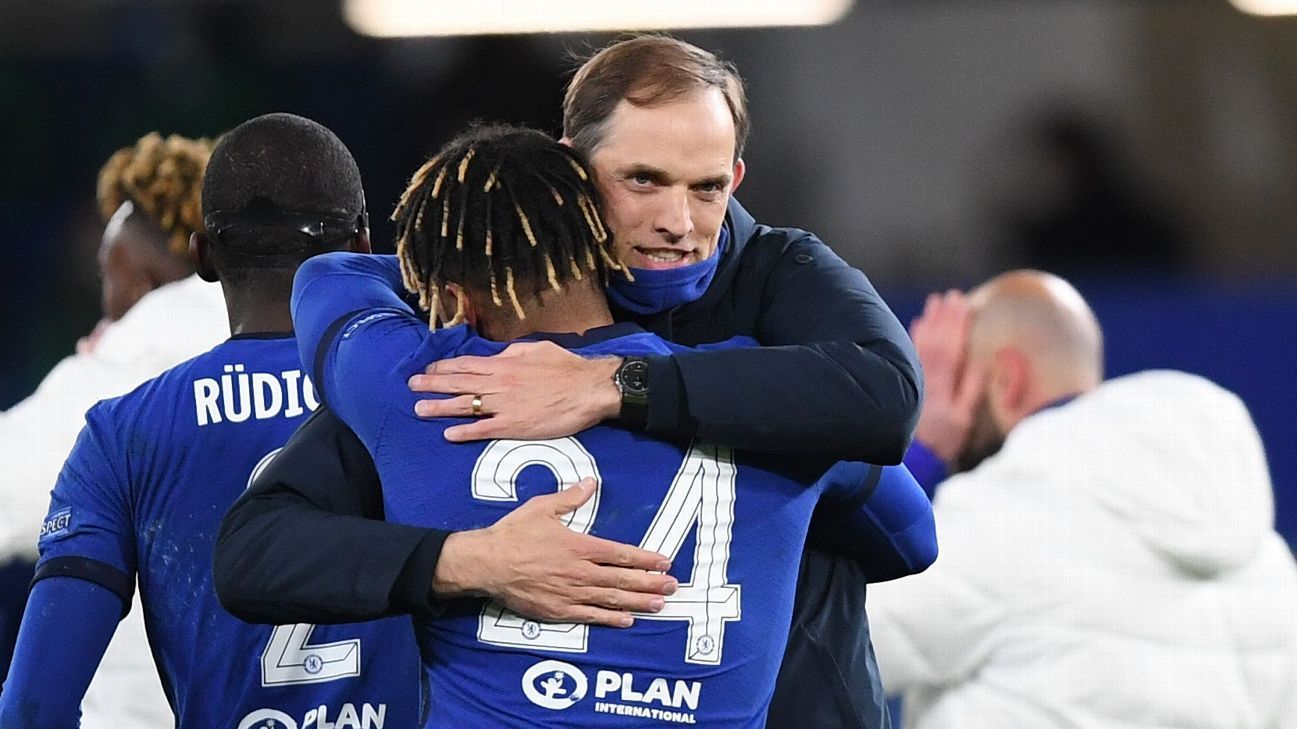 LONDON — Chelsea‘s ruthlessness has consumed many managers but Thomas Tuchel embraced it from day one, and that attitude has taken them to a Champions League final following a 2-0 win over Real Madrid at Stamford Bridge on Wednesday.

He replaced Frank Lampard 99 days ago ostensibly to mould the expensively acquired parts of this squad into a cohesive team, and few could argue he hasn’t done that now, extracting the best football seen from Kai Havertz in a Chelsea shirt while enabling N’Golo Kante and Jorginho to excel, Cesar Azpilicueta and Antonio Rudiger to look reborn. Even Timo Werner scored.

Yet the key to this remarkable transformation has been Tuchel’s poise and pragmatism in a job many before him have either misunderstood or believed they could change. This is not a criticism of Lampard, although given both his 13-year playing career at Stamford Bridge and the circumstances in which took charge, he may reasonably have expected to have been spared the quick, undignified exit that was the fate of many predecessors.

Many have talked about building dynasties, bucking the trend by lasting more than a season or two, believing they could warm owner Roman Abramovich’s cold heart and earn a prolonged stay in West London. Not Tuchel. Having been sacked by Paris Saint-Germain on Christmas Eve, the 47-year-old recognises there is precious little sentiment in the game. Yet he took the Chelsea job midseason, becoming the club’s 13th manager of the Abramovich era, admitting during his first week in charge that signing a relatively short 18-month contract held no fears.

“I want to be very honest with you, at first it was a concern, I was a little like ‘oh, why 18 months?'” Tuchel said at the time. “And after one minute I thought ‘what does it change?’ What does it change? If they give me four and a half years, they [could] sack me anyway.

“So where can I be sure that I’ll be there for four and a half years? You cannot. That is the truth at this level. I decided not to worry too much, be brave enough to take on this adventure, because it was absolutely clear that I want to do it and I don’t want to miss the chance.”

How the players have taken on board that message. It chimes perfectly with Chelsea in the Abramovich era: win now because you may be gone tomorrow. And rather than fear that pressure, why not embrace the expectation?

Havertz and Werner are in many ways the personification of this transformation in approach.

They began the season as expensive imports, Havertz £71 million from Bayer Leverkusen and Werner £49m from RB Leipzig, shoulders slumped under the weight of those price tags. Yet Havertz’s dramatically improved Premier League form earned him a start here and he excelled in his biggest game to date, pulling Real apart in tandem with Werner, who may continue to lack a clinical touch in front of goal but his link-up play was so essential to Chelsea’s success in both legs.

At the end of a slick move involving Werner and Kante, who is surely back to the sort of level that puts him in the conversation of the best all-round midfielders in the world, Havertz lifted an impudent shot over Thibaut Courtois and onto the crossbar. Werner was there to nod the ball home from two yards out for the simplest yet biggest goal of his Chelsea career.

Karim Benzema twice tested Edouard Mendy in the first half but Madrid were curiously passive in the second. Eden Hazard, making his return to Chelsea after leaving for Spain in July 2019, was peripheral throughout.

Instead, Chelsea ran riot, missing an almost farcical number of chances. Havertz hit the bar, Thiago Silva headed over, Mason Mount thrashed a shot off target from close range. Havertz missed a one-on-one before Werner played in Kante, who could only sidefoot straight at Courtois.

Finally, the pressure told. Substitute Christian Pulisic showed patience and composure to pick out Mount from the byline and the England international turned the ball home to spark jubilant scenes.

Chelsea surely cannot be as profligate when facing Manchester City in the final on May 29 in Istanbul, but that concern is for another day. For now, it is a moment to reflect on how far they have come.

Tuchel has presided over 24 games, registering 16 wins with 18 clean sheets and will contest a major European showpiece two weeks after the FA Cup final. Somewhat remarkably, he becomes the third Chelsea manager to arrive midseason and guide them to a Champions League final in the same year.

Neither Roberto di Matteo nor Avram Grant possessed Tuchel’s pedigree yet all three recognised the power of the present. Tuchel has found the right blend of giving a notoriously strong-willed squad sufficient freedom while applying enough discipline and tactical innovation to galvanise a group that had become somewhat ragged under Lampard.

“I felt it was an amazing club from the first day,” said Tuchel, who has lived in temporary accommodation away from his family ever since arriving. “I felt huge support from day one. I am very grateful to be at the sideline of this team. The heads were never down, they always stayed positive and never regretted anything. The job is not done yet. We are in two finals now and the sacrifice I personally gave was worth it since day one.”