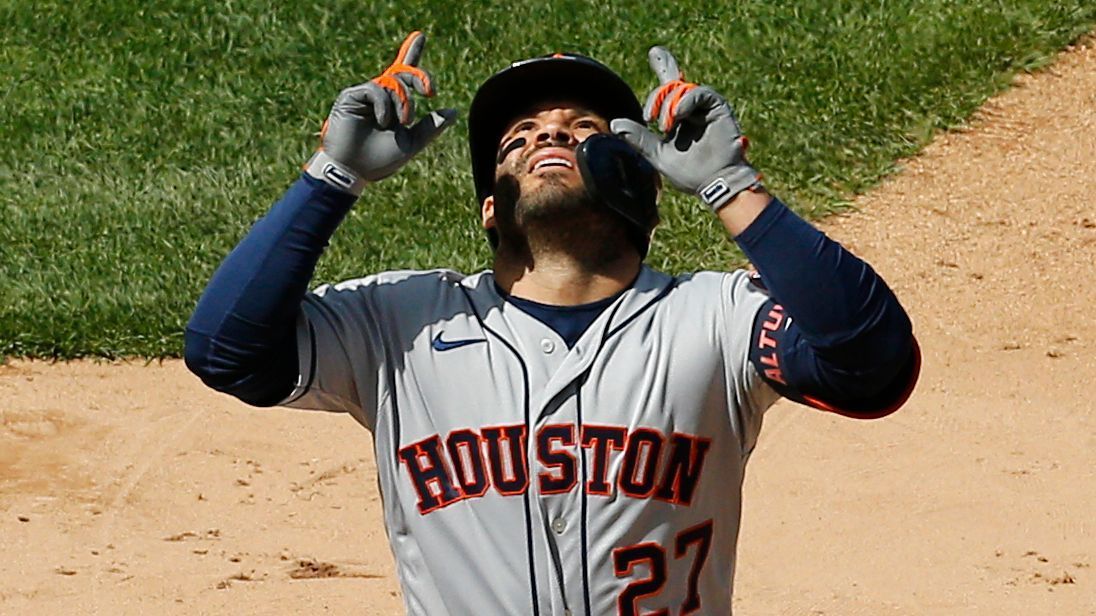 NEW YORK — Jose Altuve responded to jeering fans by marking his 31st birthday with a go-ahead, three-run homer off Chad Green in the eighth inning, and the Houston Astros beat the New York Yankees 7-4 Thursday to avoid a three-game sweep.

Gleyber Torres made an incredible, daring dash for the Yankees, scoring from first base on an infield single, but New York’s five-game winning streak ended.

Yordan Alvarez hit a pair of solo homers off Gerrit Cole, who turned a 3-2 lead over to Green (0-3) starting the eighth. After Torres pulled the Yankees back within a run in the bottom half, Martin Maldonado hit a two-run homer off Justin Wilson in the ninth, ending a streak of 75 plate appearances without an RBI.

Green started his own trouble by walking Kyle Tucker leading off. Pinch hitter Aledmys Diaz reached on a single to third baseman Gio Urshela, and Tucker took third when Urshela threw past first for an error

Maldonado struck out to bring up Altuve, booed loudly throughout the series by fans getting to express their anger directly at the Astros since their cheating scandal en route to the 2017 World Series title was exposed. He had been 1-for-11 with no RBIs in the series when he turned on a shoulder-high 96 mph 3-2 pitch and drove it over the left-field scoreboard for a 5-3 lead.

Torres’ sprint came soon after that.

With the Astros shifted to the right side, shortstop Carlos Correa knocked down Aaron Hicks‘ grounder near second but had no play as the ball trickled a few feet onto the outfield grass.

Correa recovered quickly, but Torres saw third uncovered and kept on going. Maldonado left his catcher’s spot and ran to cover third, while reliever Ryan Pressly stayed on the mound.

Correa then made a short toss to third baseman Alex Bregman, who was near second, and Torres raced home ahead of Maldonado and slid headfirst across the plate without a throw.

Andre Scrubb (1-0) pitched a perfect seventh, and Pressly got six outs for his fifth save. Houston climbed back above .500 at 16-15.

Yankees fans held critical signs and booed the Astros throughout the series, their anger lingering from the sign-stealing scandal that revealed Houston had stolen signs with a video camera en route to the title — which included a seven-game win over the Yankees in the AL Championship Series.

Giancarlo Stanton crushed a 117.3 mph solo home run off an ad hanging above the Yankees bullpen in right-center in the third inning, and slumping Clint Frazier hit a tiebreaking, two-run homer in the fourth off Lance McCullers Jr. for a 3-1 lead.

After striking out 62 in his first six outings, Cole fanned just four in seven innings — his fewest since a rain-interrupted outing against Philadelphia last Aug. 3 in his Yankees home debut. He walked none for his fourth start in a row and allowed five hits.

This was Cole’s first time facing the Astros since leaving them after the 2019 World Series.

Alvarez’s second homer of the game landed in the netting above Monument Park in center field and gave him six career multihomer games.

McCullers had pitched the final four innings of Houston’s Game 7 win over the Yankees in 2017, combining with Charlie Morton on a three-hitter and memorably throwing breaking balls on his final 24 pitches. Now 1½ years removed from Tommy John surgery, McCullers gave up 3 runs, 6 hits and 4 walks in six innings.