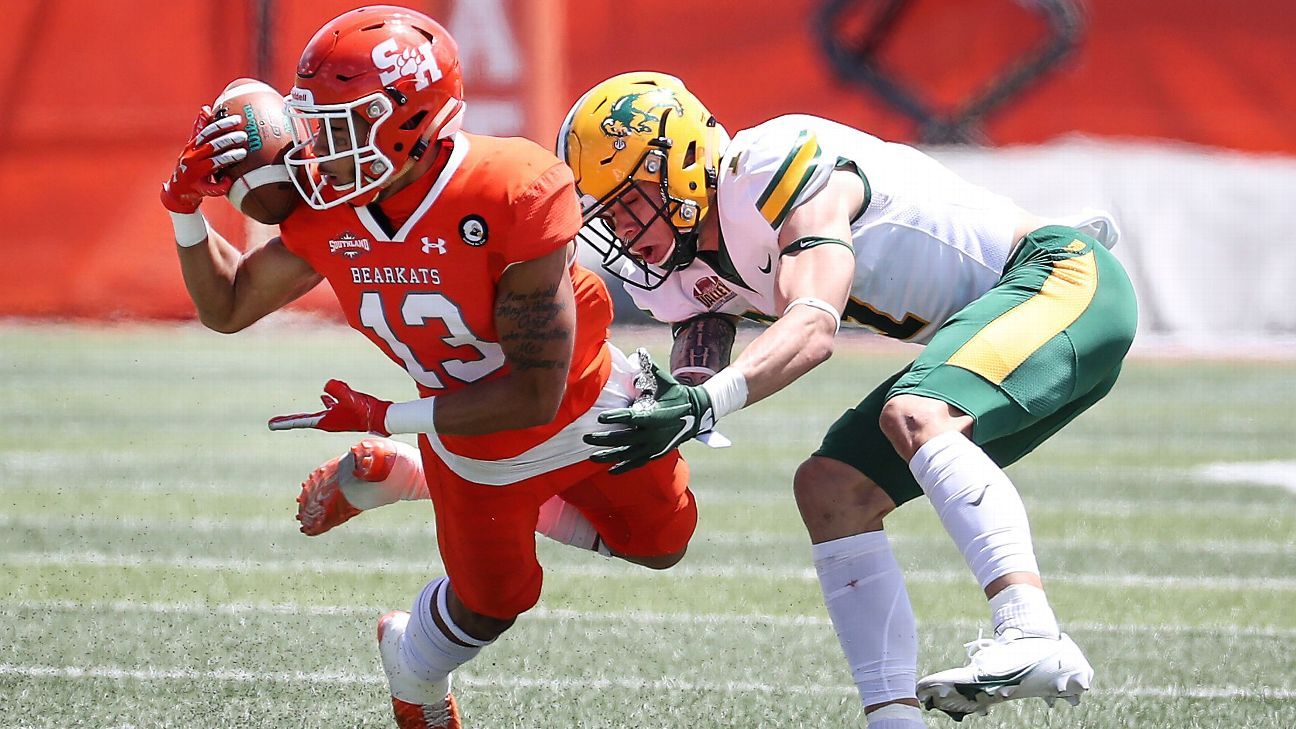 The spring season has been a blast, and now we’re down to three final games: Delaware at No. 1 seed South Dakota State (noon ET on ESPN) and No. 3 James Madison at No. 2 Sam Houston (2:30 p.m. on ABC) on Saturday and the finals in Frisco a week later. Let’s finish strong.

South Dakota State had to pull out all of the stops to hold off a furious Southern Illinois revenge attempt. After stomping the Salukis 44-3 in March, the Jackrabbits found themselves trailing 20-10 at halftime, unable to slow SIU’s offense. But Josh Manchigiah picked off SIU’s Stone Labanowitz in the end zone on the first drive of the second half, then Payton Shafer and Preston Tetzlaff stuffed SIU’s 320-pound guard-turned-short-yardage-back Zeveyon Furcron on fourth-and-goal on the next drive.

Meanwhile, SDSU’s freshman quarterback, Mark Gronowski, found himself. Not including one sack, he rushed eight times in the second half for 116 yards, including a 67-yard touchdown. He completed four passes for 111 yards and a 26-yard score. Down 31-26 late, SIU drove to the Jacks’ 36 in the closing seconds before Michael Griffin sealed the deal with a pick. The Salukis had controlled most of the action, snapping the ball 80 times to SDSU’s 49 and gaining 443 yards against a solid defense, but the top-seeded Jacks found a way through to the semis.

In just under two decades at the FCS level, South Dakota State has made itself one of the subdivision’s role-model programs. The alma mater of Adam Vinatieri and Dallas Goedert has reached the playoffs nine times in a row; the Jacks beat Kansas in 2015 and nearly did the same to Minnesota in 2009 and 2019. John Stiegelmeier began coaching at his alma mater in 1988 and took over as head man in 1997; he has won 166 games and counting, and he has built a national power in Brookings.

Advancing to the semifinals has required key contributions from just about everyone at one point or another. Gronowski has gone from earning all-state honors at Naperville (Illinois) Neuqua Valley High in 2019 to throwing for 1,387 yards and rushing for 540 in eight games for the top seed. Pierre Strong and Isaiah Davis have combined to rush for 1,147 yards (6.6 per carry). Jaxon and Jadon Janke have caught 45 passes for 786 yards and 10 scores. Senior linebacker/missile Logan Backhaus has made 7.5 tackles for loss. Nose tackle Caleb Sanders has three sacks. Safeties Joshua Manchigiah and Griffin have six picks. Kicker Cole Frahm has nailed 11 field goals, including a 52-yarder in a two-point win over Youngstown State.

Stiegelmeier always fields a fun, creative rushing attack, and this year is no exception, but SDSU has been forced to win games in all varieties of manners — with offense, with defense, with special teams — and has done so.

Delaware gives you nothing

The casual college football fan probably knows Delaware is one of FCS’ more storied programs. The Blue Hens sent Rich Gannon and Joe Flacco to the NFL and reached four FCS playoffs in the 1980s, six in the 1990s and five in the first 11 years of the 21st century. They made one of the most dominant playoff runs ever in 2003, beating SIU, Northern Iowa, Wofford and Colgate by an average of 37-6 to claim their sixth national title and first at the FCS level.

In the 2010s, however, the Hens fell into a rut. Following a loss to Eastern Washington in the 2010 finals, they won between four and seven games every year from 2011-19, reaching the playoffs only once (in 2018). This was far from a bad program, but it had lost its edge.

Defense has brought the edge back. Head coach Danny Rocco’s Hens are allowing just 11.7 points per game and 3.9 yards per play this spring. They have sacked QBs 17 times, picked off 11 passes and forced 11 fumbles.

Despite only three senior starters, first-year defensive coordinator Manny Rojas has crafted results from a unique recipe — they are undersized up front (junior Artis Hemmingway is the largest guy at 6-foot-2, 265 pounds), but all four starting linebackers are between 225-245 pounds and rangy safety Noah Plack (6-2, 210) roams the back.

They are fast and versatile, allowed more than 150 rushing yards just once (191 to Villanova) and have yet to allow more than 175 passing yards in a game. They caught a break in the quarterfinals against Jacksonville State when JSU quarterback Zion Webb injured his knee early in the game, and they ended up sacking backups AC Graham and Chance Newman four times and picking off Graham twice.

SDSU’s attack is the best Delaware has faced to date, and this semifinal should come down to two questions: Can the Jacks push this undersized front around, and perhaps most importantly, can the Delaware offense do enough damage for it to matter? The Hens nibble away with running back Dejoun Lee (645 combined rushing and receiving yards) and a passing game that completes 69% of its mostly short passes, but unless Lee is breaking a big one, there aren’t many big plays to be found. Just a couple of chunk plays could make the difference here. Who will make them?

Step one of the Sam Houston revenge tour: complete

The Sam Houston State football program has been defined by two things in the 2010s: being awesome and losing big in the playoffs. Under first Willie Fritz, then KC Keeler (who led Delaware on that 2003 romp), the Bearkats made the playoffs every year from 2011-17, made the semifinals five times and reached the finals twice. But almost every run ended in increasingly unceremonious fashion.

Since four of those six losses came against NDSU, last Sunday’s win over the Bison must have felt awfully good. The Kats overcame a bounty of special teams errors — a blocked punt for a safety and NDSU touchdowns on both kickoff and punt returns — and made a series of huge plays down the stretch to win. Somehow down 20-17 despite allowing one long drive all day, they drove 72 yards for the go-ahead score. Star quarterback Eric Schmid made his biggest pass of the season, finding Ife Adeyi for a 47-yard bomb on third-and-10 from near midfield. Schmid plunged in from six yards out to give the Kats a 24-20 advantage, and NDSU could only drive to the SHSU 21 in the closing minute. A fourth-down incompletion gave the Kats the most cathartic of wins.

Now comes stop No. 2 on the revenge tour. Because SHSU eked out JMU for the No. 2 seed, it gets to host the powerful Dukes on Saturday. I’m guessing that 65-7 loss in 2016 may have come up a few times in Huntsville this week.

With all due respect to NDSU, JMU represents a much bigger test. The Bison offense never got rolling this spring without quarterback Trey Lance (now a San Francisco 49er), and while their defense was good, it wasn’t the best Fargo has seen. JMU represents an upgrade in competition on both sides of the ball.

Lord knows SHSU has the athletes to compete, though. Schmid’s averaging more than 16 yards per completion, primarily to the trio of Jequez Ezzard (20 catches for 608 yards!), Adeyi (18 for 353) and Cody Chrest (25 for 334), while running back Ramon Jefferson averages 6.5 yards per carry. Meanwhile, the defense is somewhere between aggressive and reckless, averaging more than 10 TFLs and four sacks per game. From Schmid and Jefferson in the backfield to end Jahari Kay (eight TFLs, 5.5 sacks) and linebacker Trevor Williams (48 total tackles, nine TFLs), they could be an upgrade over anything JMU has seen this year, too.

The JMU offense is peaking at the right time

The theme of the spring season has been overcoming adversity. That goes in obvious, big-picture ways — the continued existence of the coronavirus, the cancellation of the fall FCS season, etc. — but it also applies when talking solely about the on-field product. No team has consistently dominated, not even JMU, the only team to survive the quarterfinals semi-comfortably.

Back on March 6, James Madison found itself trailing 17-3 against an Elon team it had obliterated, 45-10, in their last meeting. The Phoenix were coming off of a blowout loss to Gardner-Webb and would finish this spring 1-5, but they were completely stifling the JMU attack, holding the Dukes to a single field goal in seven possessions.

With JMU starting quarterback Cole Johnson struggling, backup Gage Moloney came in and did just enough, going 3-for-6 for 46 yards and a touchdown and, with help from a blocked punt and the rushing of Percy Agyei-Obese (19 carries, 132 yards), engineered a 20-17 comeback win. “Survive and advance” is, of course, the name of the game, but there were plenty of reasons to worry about JMU’s title chances.

There are fewer reasons now. Given a second chance in the starting lineup, Johnson slowly found his form, completing 62% of his passes for 659 yards over the next three games, albeit with two interceptions and five sacks. But against a North Dakota defense that was able to hold Agyei-Obese and backup Latrele Palmer somewhat in check (they rushed for 168 yards, but at only 4.1 yards per carry), Johnson had to make some big throws. He delivered, going 14-for-17 for 251 yards, and two second-half touchdown passes to Antwane Wells Jr. — a 19-yarder in the third quarter and a 63-yarder in the fourth — broke the game open. Up only 20-14 at halftime, the Dukes went up 20 and held on, 34-21.

The Dukes head to Texas in a bit of a transition period. The offense has averaged 33 points per game and 6.6 yards per play in two playoff wins, but the defense, untouchable in the regular season, has been mortal, allowing 23 and 5.9, respectively. North Dakota star running back Otis Weah gained 96 yards on just 13 quarterfinal carries, and after a slow start, the Fighting Hawks finished six of their last seven drives in JMU territory.

SHSU might not be quite as physical in intent as North Dakota was, but the Kats are super explosive and could try to utilize tempo to knock JMU out of sorts. Can a fierce JMU front, which features an absolute wrecking ball in 285-pound end Mike Greene (9.5 TFLs) find its groove again and keep SHSU in second or third gear?