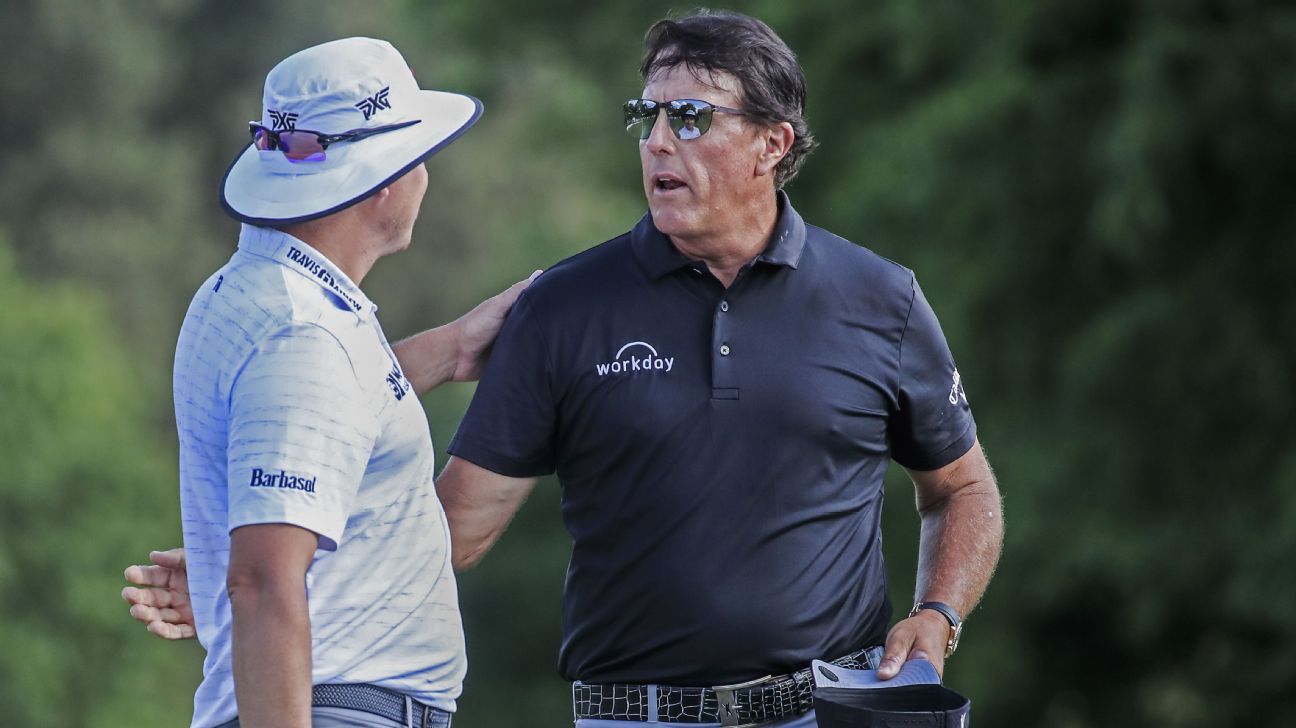 CHARLOTTE, N.C. — Just last week, Phil Mickelson complained about his inability to focus properly as he struggled yet again, missing the cut at the Valspar Championship.

It was Joel Dahmen who got Mickelson’s full attention Thursday at the Wells Fargo Championship, when Dahmen mentioned him in a couple of good-natured social media posts, saying he was getting to “check off a bucket list item” by playing with Mickelson for the first time. Later, Dahmen, who won his first PGA Tour event earlier this year, tweeted that he was excited to see “how my game stacks up against the best of the Champions Tour.”

Mickelson responded with his best round of the year, shooting 7-under-par 64 at Quail Hollow to take a two-shot lead through 18 holes.

Mickelson, 50, has won twice on the over-50 circuit but has not posted a PGA Tour finish better than his 21st at the Masters last month since a tie for second last August at the WGC-FedEx Invitational. During that time, he’s missed seven cuts in 16 tournaments and dropped to 115th in the world.

“It’s just focus; I’m just present on each shot,” Mickelson said after hitting 14 greens in regulation and taking just 25 putts. He had eight birdies and a bogey on the par-71 course.

Mickelson added: “The course holds my attention. I’ve been doing some mental exercises and so forth just to try to get my focus to elongate over five hours and so forth. That’s been a real struggle for me the last few years because physically here’s nothing holding me back from playing at a high level. But you cannot make mistakes at this level. The guys out here are just so good, and I’ve been making a lot of errors, jump simply not being mentally sharp.”

After making a bogey on his second hole of the day, the par-4 11th, Mickelson was nearly flawless. He gave himself several close chances at the 14th, 15th, 16th and 18th holes, making them all to turn in 32. He then added birdies at the first, seventh and eighth holes, and got up and down for a par at the ninth to shoot 64 for a two-shot lead over Keegan Bradley and Kyoung-Hoon Lee.

Bradley finished second last week at the Valspar Championship. The 64 is one off his best at Quail Hollow, shot in 2014.

“I poked him a little bit and he played awesome today,” said Dahmen, who shot 68 and is in a group of players tied for 10th, four shots back. “It was incredible. We kind of ribbed each other down the first hole and then it was like, okay let’s play some golf now. I’m sure there will be a lot of ribbing in our future practice rounds. But there was just a lot of good shots and storytelling.”

“The iron play today was incredible,” Dahmen said. “He hit so many great shots it seemed like inside of 6 feet. And obviously he can pitch it and putt it unbelievably and he made all of his putts today. He was kind of hitting this dink cut past my driver all day and that’s impressive.

“If he plays like this, he can play anywhere, anytime against anybody.”

Mickelson has been employing a 2-wood in certain circumstances off the tee that is 11.5 degrees. He called it a mini driver head that acts like a strong 3-wood. “I feel like I’m able to get a lot of chase out of it and I don’t lose any distance,” Mickelson said.

Mickelson said last week he was unsure if he would accept a special exemption — if offered — from the United States Golf Association to play in the U.S. Open next month at Torrey Pines in San Diego. Mickelson has won the PGA Tour event played at the venue three times and lives in the area.

Without an exemption, he would need to move into the top 60 in the world by one of two cutoff points: May 24 or June 7. A victory here would get Mickelson into the top 50. Short of that, Mickelson said he has signed up for sectional qualifying on June 8, which requires advancing from a 36-hole event.