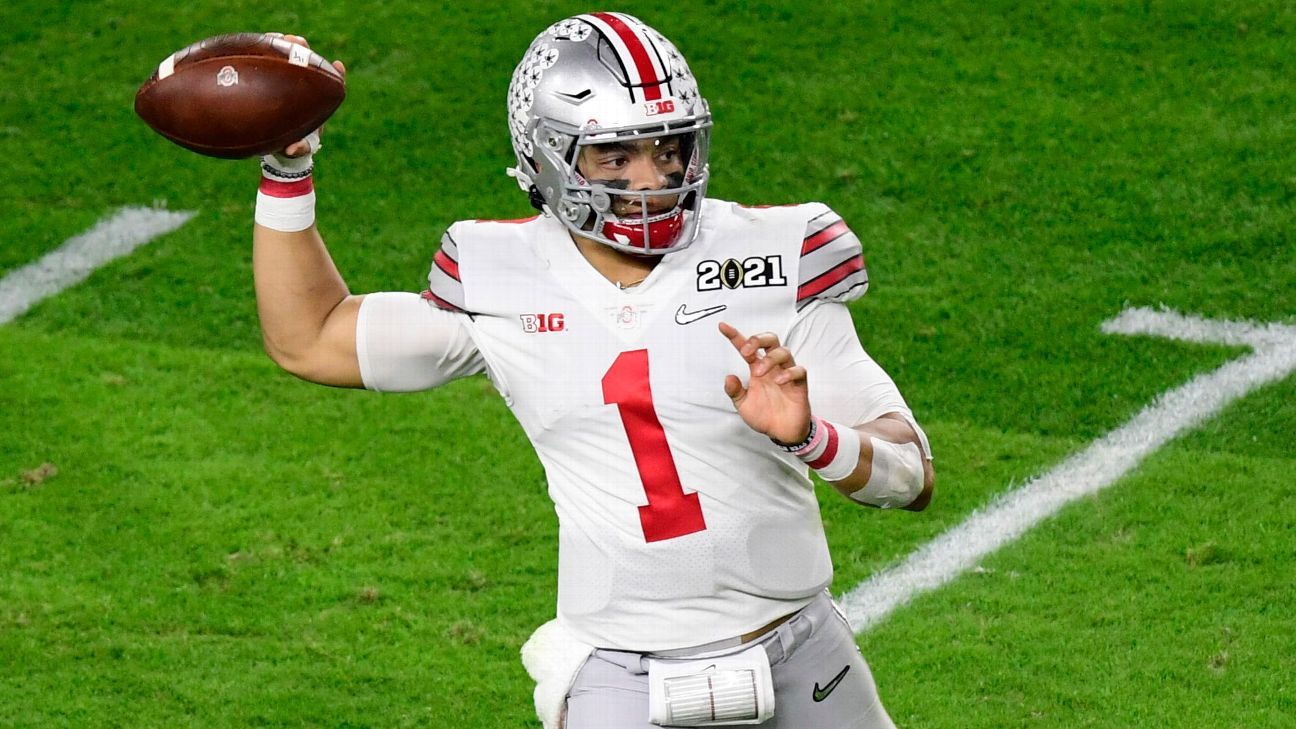 LAKE FOREST, Ill. — It’s not an overstatement to call quarterback Justin Fields’ arrival in Chicago the city’s most celebrated sports moment since the Cubs won the World Series in 2016.

The Bears — almost universally panned for their spotty Day 1 draft record over the past decade — administered a shot of adrenaline to the fan base when they pulled off a draft-night blockbuster trade with the New York Giants in order to move up nine spots and select Fields 11th overall.

Fields is no Mitchell Trubisky, who sat on the bench at North Carolina for years until a very good junior season (the 8-5 Tar Heels lost the Sun Bowl to Stanford in Trubisky’s final collegiate game) convinced the Bears to take him with the second pick in 2017.

Rather, Fields played at Ohio State — one of the nation’s preeminent college football powerhouses.

The resume checked every box, at least for the Bears.

“You know, I was at the Michigan game a couple years ago when he came back in from a knee, and we know about the ribs and the hip, and this guy’s toughness on a scale of 1-10 is an 11. And you just love that about him. Oh, and then, by the way, he runs a 4.44. You throw all that in together and it just feels good.”

The wisdom behind the Fields pick is undeniable — the Bears have been without a true franchise quarterback for 70-plus years — but what happens next is up for debate.

Fields is Chicago’s quarterback of the future. No controversy there. The same held true for Trubisky when the Bears drafted him four years ago.

The sticky part is when to play a quarterback, if at all, during their rookie season.

Veteran quarterback Andy Dalton‘s time in Chicago is likely to be brief — he signed for one-year, $10 million — but Dalton can still provide the Bears with a valuable service.

The Bears and coach Matt Nagy want to follow the blueprint from Kansas City, where former league MVP and Super Bowl champion Patrick Mahomes sat almost his entire first season behind veteran Alex Smith. The belief is Dalton can be Smith, but with red hair.

“You look at a guy like Andy Dalton and his experience and the time he’s seen, that part is extremely similar to Alex at the same point in their career, where Andy has seen every defense made to man, he’s watched a lot of tape,” said Nagy, who served as Andy Reid’s offensive coordinator in Mahomes’ rookie season. “He’s seen a lot of different schemes that people throw at him. He’s been in playoff games. He’s done a lot of things the right way. So how great is that for a young rookie to come on in and learn from a guy like him and Nick Foles.

“And so the timing element of Justin, you know, we will know and there’s some observations from all of us as coaches every single day, and just like we would tell any quarterback, when you come in here, you do everything you can to be the best quarterback that you could be, whether it’s in the meeting room or whether it’s in practice, and everything else will take care of itself. … I promise you every single person will know including Justin when it’s the right time and that’s naturally how it happens.”

You understand the Bears cautious tone when it pertains to Fields’ readiness.

“Andy is our starter, and we’re going to have a really good plan in place to develop Justin and do what’s best for our organization and win games,” Pace said.

Pace and the Bears were badly burned in Trubisky’s first year by Mike Glennon, the veteran quarterback the team added (and guaranteed $18.5 million) before the draft to be their 2017 starter. Even after taking Trubisky as high as they did, the Bears’ plan was for Glennon to be the starting quarterback for most of, if not all of, Trubisky’s rookie year. The plan changed when Glennon bombed and Chicago installed Trubisky in Week 5.

The rest is history.

Perhaps Trubisky’s fate would have been the same even had he sat on the bench his entire rookie year. Nevertheless, there is no denying Trubisky was not ready when the Bears turned to him, and some of those early career limitations never improved over time.

Dalton is a much better quarterback than Glennon.

To compare Dalton to Alex Smith circa 2017, though, is a stretch. That’s the conundrum.

People forget the great run Smith enjoyed in Kansas City. Smith passed for 4,042 yards, 26 touchdowns, five interceptions and had a quarterback rating of 104.7 in his final season with the Chiefs. No wonder Kansas City felt good about keeping Mahomes in a backup role until the end of the season.

Before the draft, Bears fans complained about the Dalton signing, but since the Fields pick, the Dalton move has largely been forgotten.

It should not be.

The key to the Bears’ future, ironically enough, is in Dalton’s hands. The longer he keeps Fields on the sideline, the better off the Bears may be.