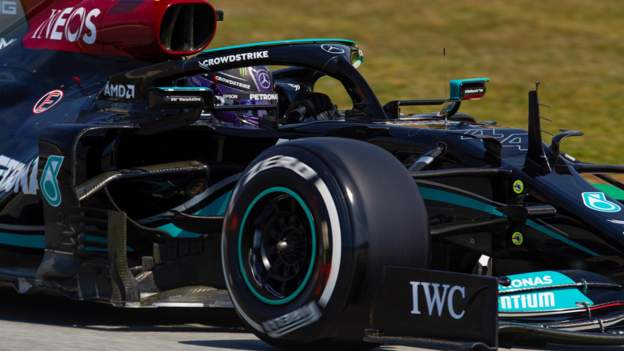 Verstappen made an error on his qualifying simulation run on the soft tyres and ended ninth with a time set on medium tyres earlier in the session.

The Alpines of Esteban Ocon and Fernando Alonso were fourth and fifth.

Alpha Tauri’s Pierre Gasly and Yuki Tsunoda were next up, ahead of the second Ferrari of Carlos Sainz, and the two Red Bulls of Verstappen and Sergio Perez.

McLaren have not so far shown the pace that has put Lando Norris third in the championship after three races and the Briton was 12th with team-mate Daniel Ricciardo down in 15th.

Verstappen appeared to have the pace to challenge Mercedes closely, as has been the case so far this season – he was about 0.1secs off Hamilton’s time two-thirds of the way around the lap before trying to carry too much speed through Turn 10.

He ran wide off the track and then almost lost the rear and had to back off, and was unable to record a second lap on the fragile tyres.

Perez, though, was struggling for one-lap pace. He did get a lap on the soft tyres but was just over 0.1secs off Verstappen’s medium time and the Mexican looked to be struggling to find the limit of the car so far at the Circuit de Barcelona-Catalunya.

Earlier in the day, Bottas had led the first session, with Verstappen splitting him from Hamilton, and just 0.123secs separating the three.