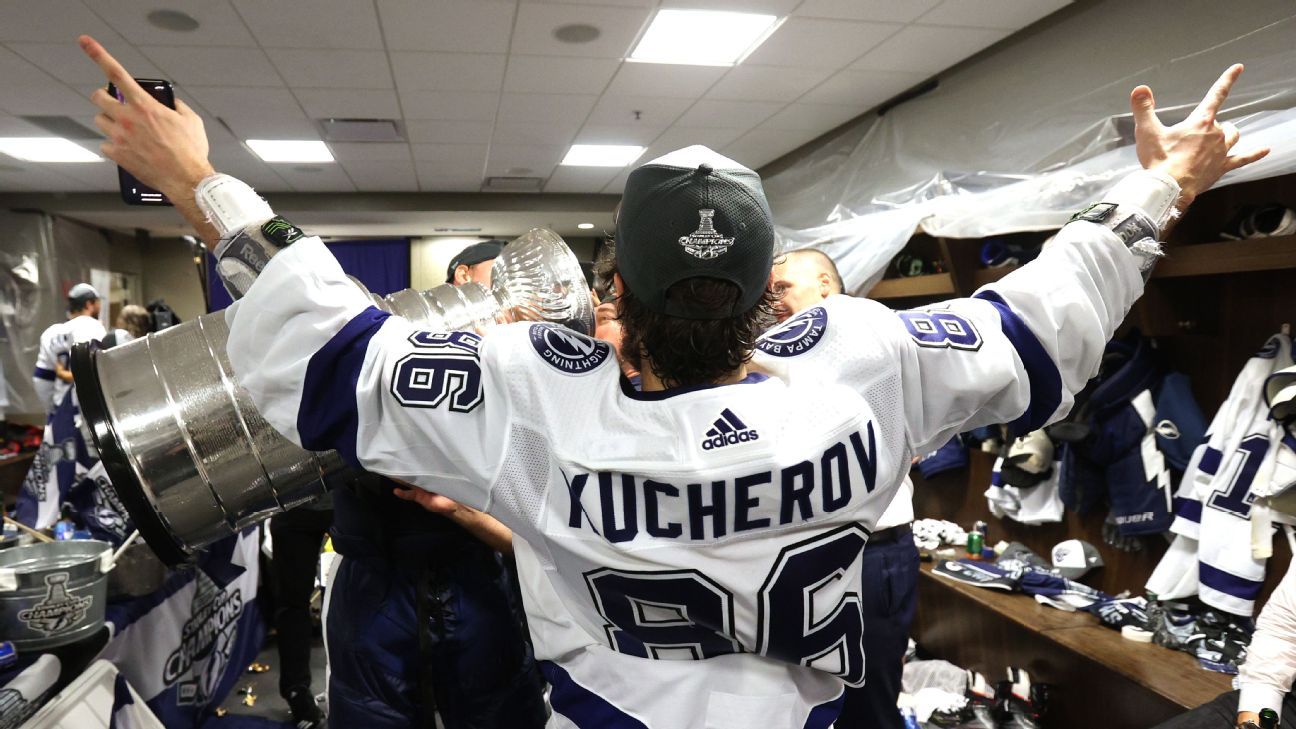 When it comes to rooting interests in the 2021 Stanley Cup Playoffs, we can all agree on one of them: the health and safety of everyone participating, after a regular season that saw a parade of players on the COVID-related absences list and plenty of interruptions to the schedule.

But beyond that, we’d love to have these people, places and things that we’re pulling for in the chase for the Cup. Here’s our top 10:

The Tampa Bay Lightning won the Stanley Cup last season. Unless you’re a fan of dynasties or Tampa Bay as the sports epicenter of the universe, there’s not really a compelling reason to root for the Lightning again. But I am rooting for Kucherov, because there’s something absolutely delicious about the way the Lightning were able to navigate his injury.

Kucherov had surgery before the season; his contract was placed on long-term injured reserve; the Lightning didn’t have to blow up their team due to the flat salary cap; they managed to make the playoffs without the former Hart Trophy winner playing a millisecond of the regular season; and they likely will get a fully armed and operational Nikita Kucherov — as well as a returning Steven Stamkos — for the first round of the postseason.

I’m not saying the surgery wasn’t legit or inferring any cap shenanigans here. I’m just saying if Kucherov returns as his normal, dominant self, then this is one of the all-time inadvertent flexes in the NHL.

My father had a New York Daily News cartoon hanging on our wood-paneled basement wall that featured caricatures of New York Islanders players from their fourth straight Stanley Cup win. Three of those Cups were captured on Coliseum ice, where those dynasty teams were 11-1, and the arena was nicknamed “Fort Neverlose” by fans.

The last time the Cup was hoisted at Nassau Coliseum was a week before “Return of the Jedi” was released in theaters for the first time. In other words, it’s been a while. The 2021 Stanley Cup playoffs will be the final games played in the old “barn” before the Islanders move near the barns at Belmont Park next season. Here’s hoping for a few more memories to be made (that don’t involve the hockey-in-quicksand action we saw from the Islanders in the bubble last season).

When the Colorado Avalanche were eliminated in Game 7 of the Western Conference semifinals last summer, they were missing forwards Gabriel Landeskog, Joonas Donskoi and Matt Calvert, goalies Philipp Grubauer and Pavel Francouz and defenseman Erik Johnson. As they head towards the playoffs this season, they’re without Johnson, Francouz and Calvert. Brandon Saad and Samuel Girard are hurt.

The Avalanche are scary good. GM Joe Sakic has been lauded for meticulously constructing a roster that could win the Stanley Cup this season … if healthy. That’s the challenge, especially when it comes to goaltending. Grubauer was limited to seven playoff games last season. With Francouz out, the other options if Grubauer goes down are Devan Dubnyk, of the .838 save percentage, and Jonas Johansson, of the “never having played in the postseason before.”

Out: playoff bubbles. In: bubble-wrapping Philipp Grubauer for protection.

The Wild’s transformation into fun-time, goal-scoring party team remains one of the most jarring in recent memory, given the franchise’s reputation for … well, not emphasizing the offensive game all that much. That was pre-Kirill Kaprizov (or Ka-Pre-zov), as the rookie winger is the favorite for the Calder Trophy, and has helped the Wild to their highest goals-per-game average (3.25) in franchise history in this shortened season.

Minnesota has lost once in regulation since April 10. We’ve all been anticipating a “Godzilla vs. Kong” battle between Vegas and Colorado for the West Division crown, and here come the Wild acting like (spoiler alert) Mecha-Godzilla to interfere in that showdown.

Even if he’s playing your team, rooting for Connor McDavid to do Connor McDavid things in the playoffs is rather easy. He’s going to do them whether you want him to or not, so you might as well enjoy the nightly pantsing of opposing defensemen and bedazzling of goaltenders with his superior speed and stickhandling.

McDavid has 18 points in 17 career playoff games and this is his sixth NHL season. Is it too much to ask for the Oilers to make a little run and give us maximum Connor?

It hasn’t been all that fun to be Taylor Hall recently. Sure, there was that MVP season with the New Jersey Devils. That was fun. But the past calendar year saw him go from belle of the free-agent ball to watching the market shrink due to the pandemic. So he went to the Buffalo Sabres for a season to make some big cash ($8 million) and pump up his stats while playing alongside Jack Eichel. Well, one out of two isn’t bad.

He landed a no-move clause from Buffalo, so when the Sabres imploded and turned into sellers, Hall controlled his next destination. And by next destination, we mean “Boston,” which is where he’s wanted to end up for years.

So at the end of this free-agent gambit, Taylor Hall will have (a) gotten paid big, (b) gotten to audition in person for a new contract with the Bruins and (c) had a chance to play in the postseason with a team that has a slightly better chance as competing for a championship than the 2018 Devils and 2020 Coyotes did, the teams which account for Hall’s 14 career playoff games. This was basically Machiavellian.

Four years into their existence, the “Golden Misfits” have cleaned up, put on a tie and gotten a job at the bank. It’s all business and that business is winning the Stanley Cup. That’s been the goal of owner Bill Foley from his first expansion fee payment to the NHL through the last check he cut to free-agent coup Alex Pietrangelo.

He’s invested heavily in this franchise in every way possible, turning what many expected to be a team for comp tickets and high rollers into the city’s most beloved franchise (Sorry, Raiders.). Maybe we just want to see what raising the Cup sounds like in a packed T-Mobile Arena this summer — Foley says the team could have 100% capacity by the final round. Maybe we just want to see what a Stanley Cup parade down The Strip looks like.

Maybe we just want to see an owner who had the audacity to believe an expansion team could become a perennial contender this quickly get his ring.

Sid is averaging 1.13 points per game to lead the Penguins through various forms of adversity, from their usual spate of injuries to the departure of general manager Jim Rutherford. He won’t win the Hart Trophy — that’s Connor, by a sizable margin — but could easily be a finalist for MVP.

The reason we’re rooting for Crosby is because the sands keep falling through that hourglass. He’ll be 34 in August. He’s Sid The Kid in name only. Who knows how many more cracks he gets at a fourth Stanley Cup, matching Wayne Gretzky’s career total? Let’s enjoy it while we can.

Remember when Brind’Amour was hired as Hurricanes coach in 2018? He had never been a head coach. There was speculation that owner Tom Dundon would have a desk in his coach’s office. It turns out that Rod Brind’Amour is actually really, really good at this coaching thing. He has a .638 points percentage through his first 203 games behind the bench.

It’s no secret that coaches enter a higher stratosphere when they win a Stanley Cup. That goes for league-wide reputation as well as finances — and Brind’Amour is due a new contract for next season. The Canes are a likeable team, and Brind’Amour is the unassuming architect of their success.

But mostly, we just want to see him recreate this Stanley Cup photo 15 years later.

Every NHL postseason has a few candidates for “old guy that never won the Stanley Cup but we sure would like to see him do it.” In the past postseason, it might have been Dallas Stars center Joe Pavelski, who fell just short. We go from “Little Joe” last summer to “Jumbo Joe” this postseason.

The Toronto Maple Leafs have their best shot at winning their first Stanley Cup since 1967, both due to how good they are and the fact they may never have to see the Bruins across the ice. Thornton isn’t the only veteran player seeking his first ring: Jason Spezza (37), Nick Foligno (33) and Wayne Simmonds (32) are among the others. But the 41-year-old center is the one we want to see lift the Cup the most, because it will be the perfect capper to a first-ballot Hall of Fame career.

And, frankly, don’t you want to see what Joe Thornton would do during his day with the Cup? Even if it’s while looking through your fingers as you attempt to avert your eyes?