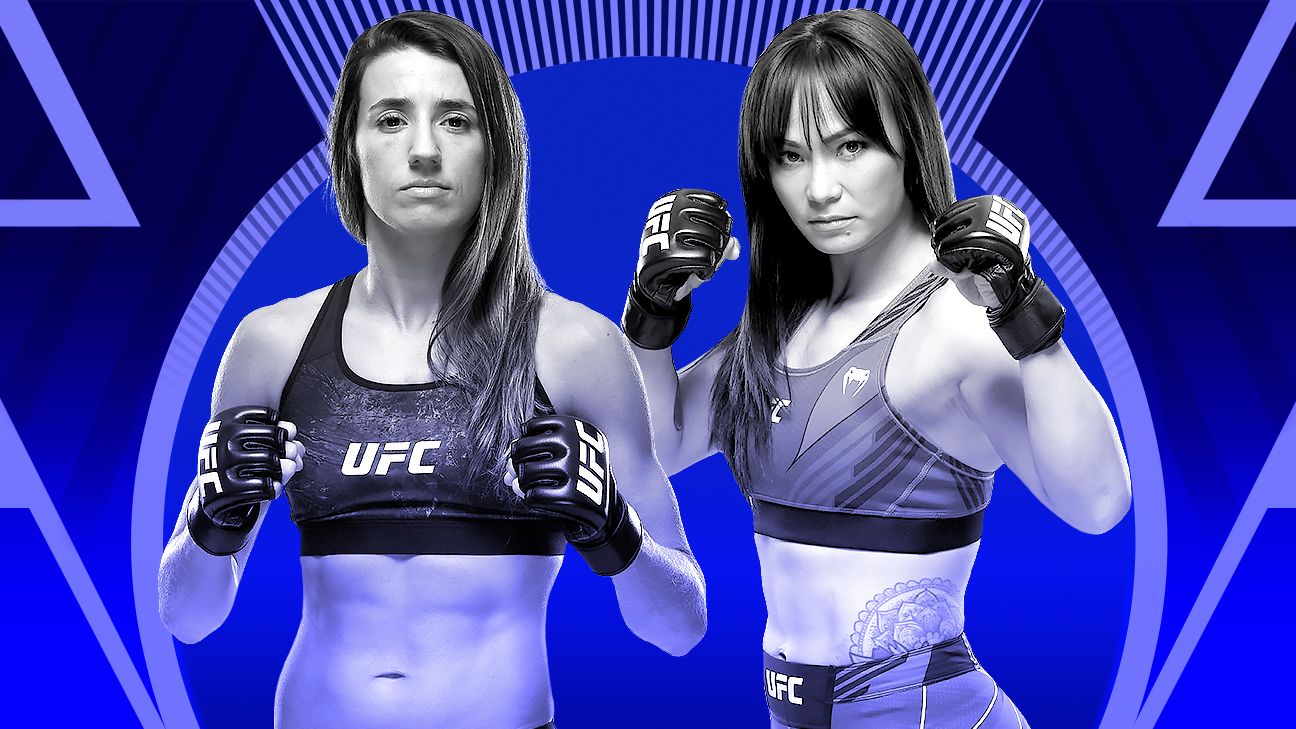 It’s a disclaimer that goes along with every single MMA event: Card is subject to change.

And to be frank, Saturday’s UFC Fight Night in Las Vegas was hit hard by change. This card was supposed to feature the return of TJ Dillashaw, a former bantamweight champion who lost his belt to a drug suspension two years ago, in a fight against Cory Sandhagen, the fastest-rising contender in the division.

You lose a fight of that magnitude, the card is going to suffer. There’s no way around it. Fortunately, however, Saturday’s card (8 p.m. ET on ESPN, prelims at 5 p.m. on ESPN+) has some depth to soften the blow. Here are a few storylines to look out for this weekend:

Two strawweights take center stage at UFC Fight Night as Michelle Waterson faces Marina Rodriguez. But these two won’t be battling at 115 pounds, but 125 due to the last-minute creation of the bout. Plus, “Cowboy” Donald Cerrone makes his return in the co-main event against Alex Morono.

4: UFC main event appearances by Waterson (including Saturday), which will tie her with flyweight champion Valentina Shevchenko for fourth most among women. Former bantamweight champs Ronda Rousey and Holly Holm each have headlined six cards, one more than two-division titlist Amanda Nunes.

7-0: Rodriguez’s record in fights that end in a finish (six by knockout, one by submission).

0: Finishes by Waterson since December 2016. She has fought eight times since then, winning four of those bouts, all by decision, including two split decisions. Before that, Waterson had had finishes in 12 of her 14 wins.

2: Draws in the UFC for Rodriguez, making her the only woman with multiple draws and one of only five modern-era fighters overall to have more than a single draw in the UFC.

14: Takedowns in the UFC by Waterson, the seventh most in strawweight history, leading to her nine submission victories. The goal for Rodriguez, then, is to keep the fight standing. In her three UFC wins, Rodriguez has defended the takedown 89% of the time (8 of 9). In her three draws/losses, she has defended takedowns just 45% of the time (8 of 18).

“On the feet, I feel Rodriguez definitely has a boxing advantage,” said Carla Esparza, a former UFC strawweight champion who has fought — and defeated — both women. “Waterson did land a few kicks on me, and my leg was black and blue, but Rodriguez has a reach and power advantage. As far as the wrestling, I could see Waterson taking it to the ground. She has nice throws that I’ve seen her hit. It’s just a matter of closing that gap, which is difficult because she likes to be at range with her kicks. But if she’s able to create that clash of bodies, I could see her taking Rodriguez off her feet.”

Check out how Esparza and other experts break down and predict the result of the main event.

Watch the main card on ESPN. Don’t have ESPN? Get instant access.

All of the fights are also available on ESPN+. If you don’t have ESPN+, get it here. Also: Download the ESPN App | WatchESPN | TV schedule

Donald Cerrone explains what fighting means to him at this point in his career and his mindset ahead of taking on Alex Morono.

1. In the co-main event, Donald “Cowboy” Cerrone steps back into the Octagon in hopes of snapping a five-fight winless streak (0-4, 1 NC) when he takes on Alex Morono. Cerrone, the UFC’s career wins leader, will once again tie Jim Miller for most fights in UFC history. Cerrone will also try to break a tie with Charles Oliveira for the most UFC finishes. This will be the 21st time that Cerrone will be in a UFC main or co-main event, breaking a tie with UFC Hall of Famer Randy Couture and Vitor Belfort for third most in UFC history, behind Anderson Silva (24) and Michael Bisping (22).

2. Cerrone isn’t the only fighter on the card with massive UFC experience. Saturday will mark the 25th time Neil Magny steps into the Octagon when he takes on Geoff Neal on the main card. Magny will break a tie with Josh Koscheck for the third-most fights in the welterweight division, and he will be trying for his 18th win in the division, which would put him one behind UFC Hall of Famer Georges St-Pierre for the most of all time.

3. Lightweights Diego Ferreira and Gregor Gillespie meet with both coming off a loss — but in much different circumstances. Ferreira fell to Beneil Dariush in a split decision just three months ago. Gillespie last fought in November 2019 and suffered his first defeat, a brutal head-kick knockout loss to Kevin Lee.

4. The UFC’s most active fighter is back in action. Angela Hill, who takes on strawweight Amanda Ribas, will be in her 15th fight since rejoining the UFC in 2017, breaking a tie with Andrei Arlovski for most appearances over that span. Her total is three more than those by the next woman (Randa Markos). Ribas started her UFC career 5-0 before being knocked out by Marina Rodriguez in January.

5. When Carlston Harris steps into the Octagon to face Christian Aguilera during the prelims, he will be the first person to represent Guyana in the UFC. In all, the prelims will have seven countries represented: the United States, Brazil, South Korea, Cameroon, Uzbekistan, Slovakia and Guyana.