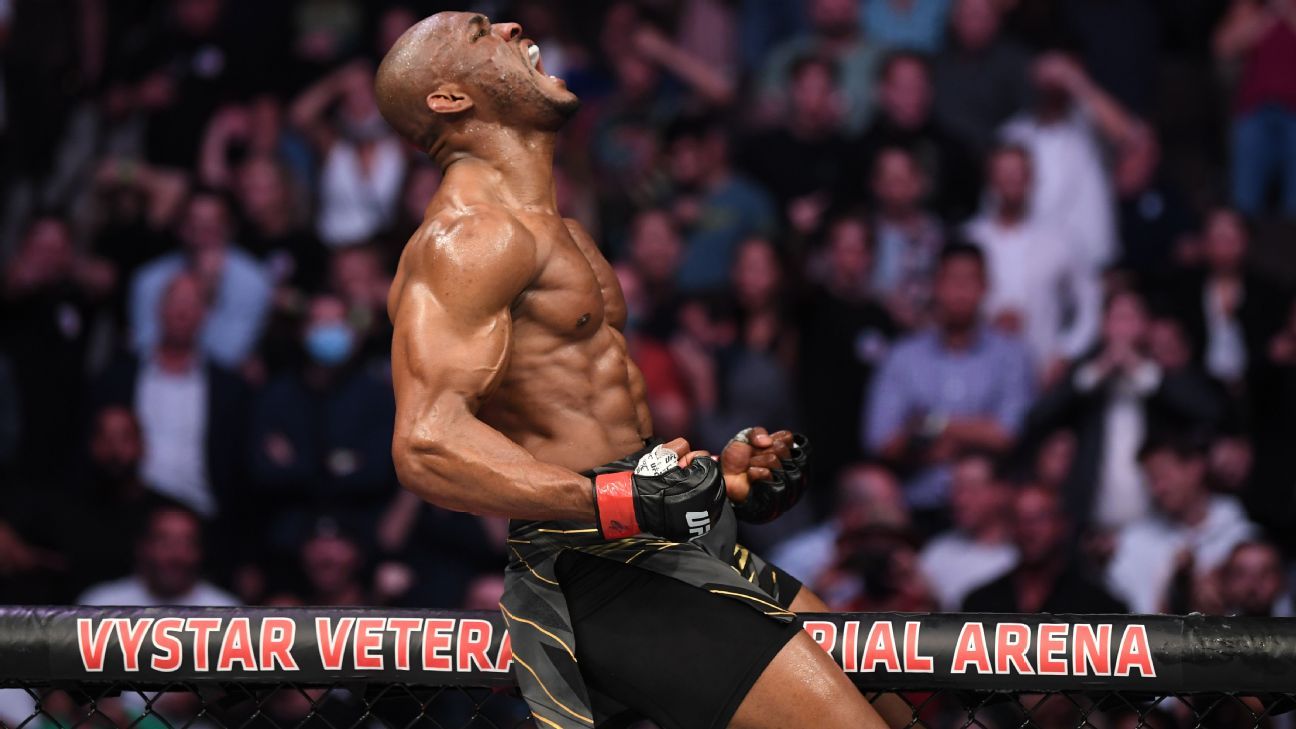 UFC welterweight champion Kamaru Usman believes he has a wealth of options for his next fight — and yes, those options include a boxing match against YouTube star Jake Paul.

Usman (19-1) is less than two weeks removed from his fourth title defense at UFC 261 in Jacksonville, Florida, where he knocked out Jorge Masvidal with a monstrous right hand in the second round. Usman was voted ESPN’s No. 1 pound-for-pound fighter in the world the following week.

“I think [UFC 263] is an important night for these fights to play out,” Usman said. “Yes, I do want to see how those play out. If Leon looks spectacular, it would make sense. If Nate looks spectacular, that could make sense as well. With the whole Marvin situation, I don’t want to necessarily think about it, because I’m 100 percent behind Izzy on that. I think he can pull it out. But if there was ever a case where I would actually go up and challenge for that [second] belt, it would be without Izzy in the picture. So if Izzy isn’t the champ, it’s something we can take a look at.”

Usman, who trains out of Denver, is less interested in a rematch against Covington, whom he beat in 2019. The UFC has indicated Covington is next. Usman said he’s not against it, but it’s not his first choice.

“I’m not going to say I don’t want the fight,” Usman said. “I want all the smoke. It doesn’t matter who it is. I want all the smoke. At the end of the day, what has [Covington] done to earn this? Your claim to fame can’t be, ‘I went five rounds [against Usman in a title fight in 2019] and the guy broke my jaw and finished the fight.'”

Of course, the wild card in all of this is Paul, who has disrupted the combat sports world over the past two years. As a professional boxer, Paul is 3-0 with three knockouts. Last month, he knocked out retired UFC welterweight Ben Askren in the first round, and he has offered to fight Usman on social media.

Usman admitted Paul’s antics have drawn his attention, and he is not opposed to holding a discussion with UFC president Dana White on a potential boxing match against Paul.

“He’s starting to think he’s a fighter, and that’s the state we’re in,” Usman said. “YouTube fighters picking fights with actual fighters. It’s a no-lose situation for them because if they go in and get beat up, they still make a lot of money. That kid is dangerously close to taking me to that violent place. He has no business mentioning my name in his mouth. And now he’s putting pictures of me and my family out, so it’s starting to slowly shift to that place where it could be a problem.