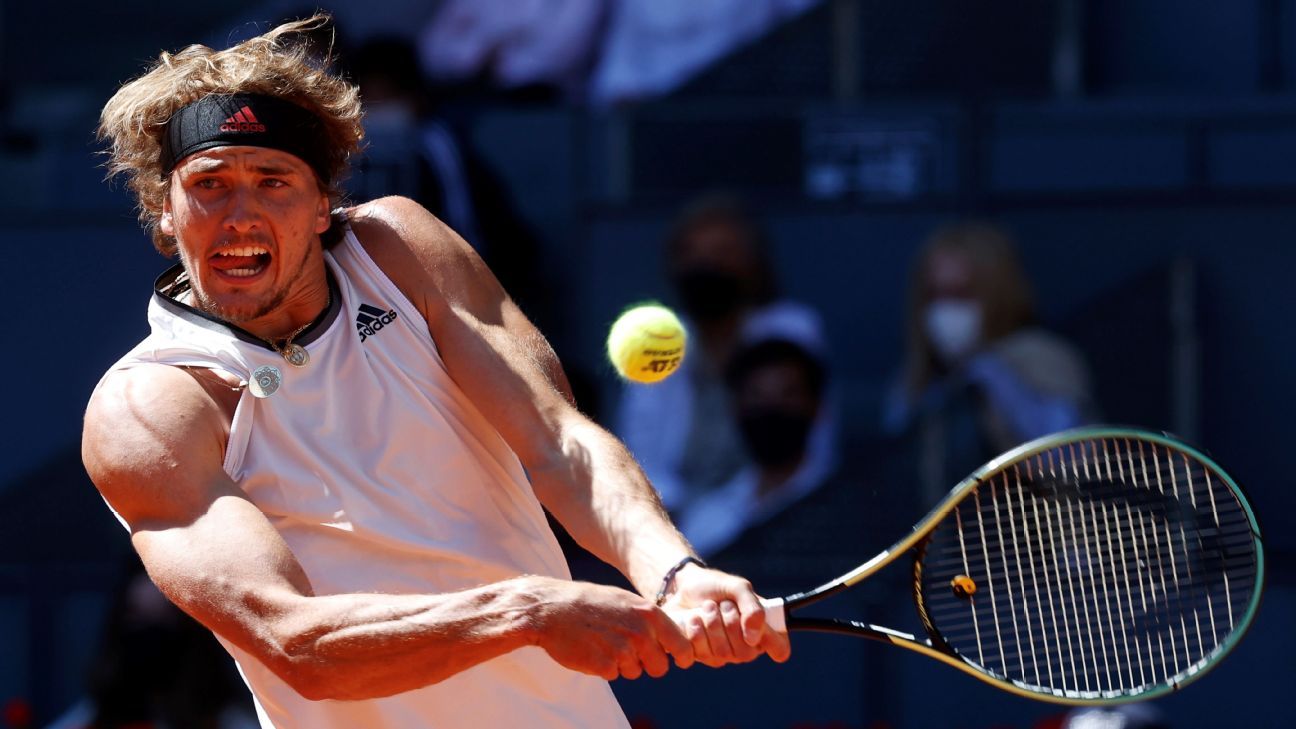 MADRID — Rafael Nadal‘s bid to reach a 75th semifinal at a Masters event ended Friday with a 6-4, 6-4 loss to Alexander Zverev.

The sixth-ranked German beat Nadal for the first time on clay and for the third time in a row overall. Zverev broke Nadal’s serve twice in the first set and once in the second. His previous two wins over Nadal were on indoor hard courts.

Zverev will next face Dominic Thiem in a rematch of the 2018 final. Thiem, who lost to Zverev in straight sets in the Spanish capital three years ago, defeated John Isner 3-6, 6-3, 6-4.

Nadal, who is preparing to play for a 14th title at the French Open, had been improving after a slow start to his clay season. He lost to Andrey Rublev in the Monte Carlo quarterfinals before beating Tsitsipas in the Barcelona Open final.

In the early match, Thiem capitalized on two of his four chances to break Isner’s serve, and that was all he really needed.

Thiem broke the tall American on his first chance in the second set and then once more in the third to reach the semifinals in Madrid for the fourth straight time.

“He is one of the best servers in history, especially here in the altitude. His serve is bouncing so high and it’s so difficult to return,” Thiem said. “I really stayed focused, with a good fighting spirit. Against guys like him, a few points decide and that’s when I saved the break points in the beginning of the second set.”

Thiem saved four break points in the fifth game of the second set, then broke Isner’s serve in the next game to take the match to a third set. The Austrian squandered another break chance in the first game of the deciding set but capitalized again at 4-4. He then served out the match.

Isner served more than 100 aces in his four matches in the Spanish capital, where the high altitude adds speed to the balls and makes the clay courts faster.

The American had 18 aces on Friday and 29 in his three-set win over sixth-seeded Andrey Rublev on Thursday, including two consecutive to close out the match. He said he was outplayed and only stayed in the match thanks to his serve.

The 39th-ranked American had lost in the round of 16 in his last two tournaments, with his other quarterfinal appearance this year coming in March in what was his first tournament since last year’s French Open.

Thiem, last year’s U.S. Open champion, was coming off a break after a slow start. The fourth-ranked Austrian hadn’t played since March.

Later Friday, eighth-seeded Matteo Berrettini will face 16th-seeded Cristian Garin, and Alexander Bublik will take on Casper Ruud in the other quarterfinal matches.

The Madrid Open was not played last year because of the coronavirus pandemic.