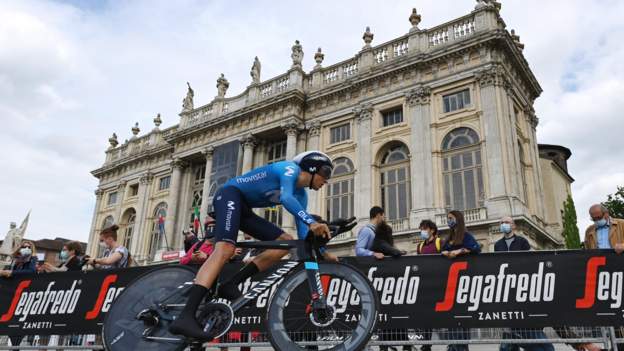 Belgium’s Remco Evenepoel said he had “tears in my eyes” as he made an emotional comeback at the Giro d’Italia, as Italy’s Filippo Ganna won the opening time trial in Turin.

Evenepoel, 21, was competing for the first time since fracturing his pelvis in a fall from a bridge at the Il Lombardia race in August 2020.

He was seventh after Saturday’s 8.6km race, 19 seconds behind Ganna.

British favourite Simon Yates was 37 seconds off the pace.

“I had tears in my eyes on the start ramp,” said Deceuninck-Quick Step rider Evenepoel. “It’s been a long journey and to finally be able to start my first Grand Tour makes me very happy.

“To finish seventh on this first stage is amazing, a perfect start that I didn’t expect and which makes me proud.”

Word champion Ganna won the opening stage for the second straight year in a time of eight minutes and 47 seconds, with compatriot Edoardo Affini 10 seconds behind in second and Norway’s Tobias Foss third, 12 seconds adrift.

Sunday’s second stage is a 176km ride from Stupinigi to Novara.

Team BikeExchange rider Yates, who finished ahead of rivals Egan Bernal and Vincenzo Nibali, said: “It was a day to blow the cobwebs out, a tough little opener but now we have started so I am looking forward to the rest of the race.”