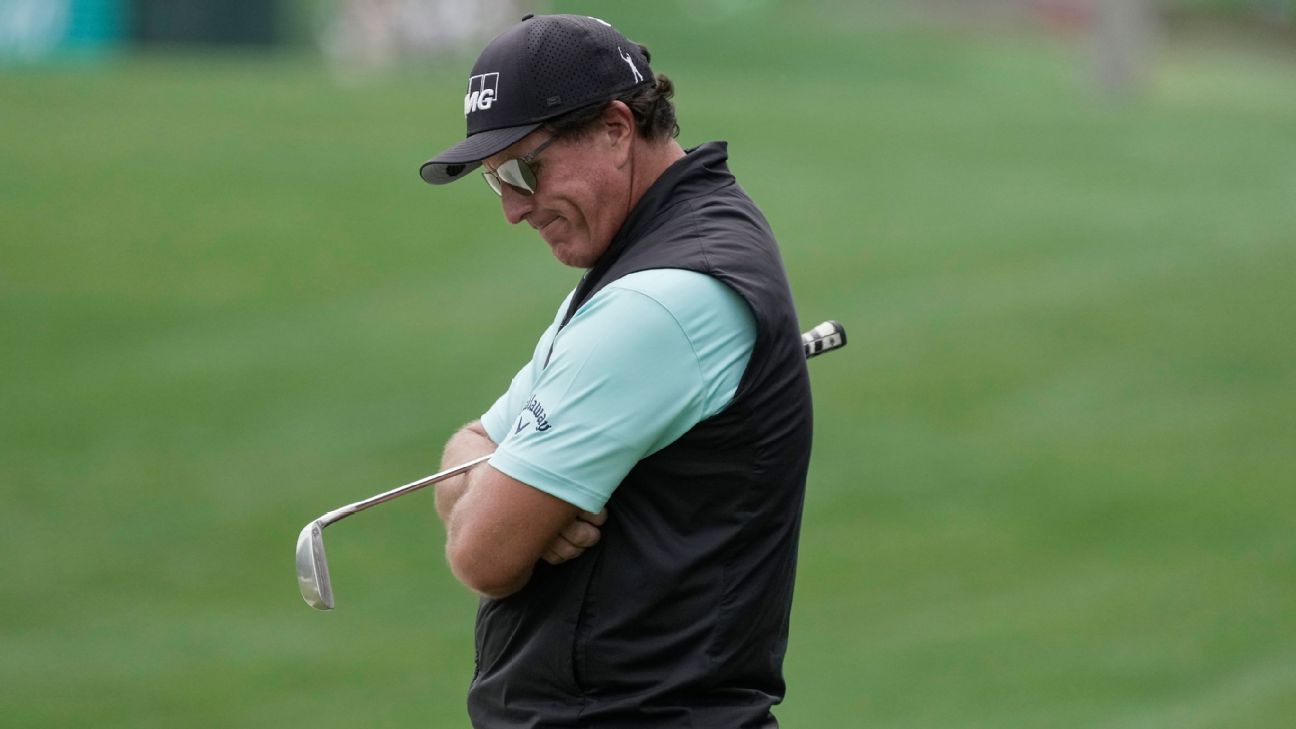 CHARLOTTE, N.C. — Phil Mickelson was 11 shots worse than his previous round at Quail Hollow. Bryson DeChambeau made an 8 on his 16th hole and headed straight for the exit.

Turns out nothing was as bad as it seemed Friday in the Wells Fargo Championship.

Morning gusts gave way to a relentless wind in the afternoon and had just about everyone trying to finish without too much damage. Former U.S. Open champion Gary Woodland had a 2-under 69 in the morning and shared the 36-hole lead with Matt Wallace (67) and Patrick Rodgers (68).

No one in the afternoon could catch them at 6-under 136.

Rory McIlroy will be playing on the weekend for the first time in two months. He shot a 66, and by the end of the day, that was good for a tie for fifth, two shots out of the lead.

Never mind that he followed a 64 with a 75, losing a little focus at the end when different swing thoughts entered his head on holes with water, the wrong kind of ripple effect.

“I’m excited to be in contention heading into the weekend, and I know I’m playing well,” Mickelson said.

DeChambeau had reason to leave. Two balls in the water on the par-5 seventh led to his triple bogey and sent him to a 74. He was just inside the top 100 when he left without speaking. And then the wind arrived, the scores shot up and he made the cut on the number at 2-over 144.

“The hardest conditions I’ve played in a while,” Justin Thomas said after a 73 that included a three-putt double bogey on the par-3 13th. His downhill putt from 18 feet caught a gust so strong it stopped 4 feet short.

“Even the downwind holes were hard,” said Carlos Ortiz of Mexico, who has lived in Texas the last 12 years where he described typical conditions as “windy or windier.” Being used to it doesn’t make it easy, though Ortiz managed a 68, the best score in the afternoon.

Mickelson was in the group another shot behind, determined to put an end to a drought so severe that he hasn’t finished among the top 20 in nine months.

Everything felt and looked so easy when he opened with a 64. This was more of a challenge, particularly late in the round, and Mickelson felt his focus lapsing again.

He hit into the water on the 14th while deciding whether to hit a draw or a cut (he still managed par; his wedge game is still among the best).

After a good tee shot on the par-5 16th, Mickelson wasn’t quite sure what to do with his next one. He pulled it well right of the green, and his high flop shot landed too far and went over the edge. He chipped poorly to about 12 feet and turned what looked to be a sure birdie into a bad bogey.

Two holes later, he found the water on the par-5 17th for a double bogey.

“The back nine, I just wasn’t sharp,” Mickelson said. “I think an example of what I’ve been talking about is on 17, we’re standing over the ball and I’m changing my mind and I’m changing the shot, moving the clubhead a little bit. Instead of backing away and kind of refocusing, I just hit it and I’m not really aware of what I’m doing. So I’ve got to fix that.”

In his mind, he threw away two shots on both the 15th and 17th holes, the difference of a score at par.

“I just can’t keep doing that,” Mickelson said. “I’m optimistic for the weekend, though.

Woodland was all smiles. He missed the cut badly last week at Innisbrook, called Butch Harmon and decided to go back to his previous coaches, Harmon and Pete Cowen. It didn’t take long for him to feel better. His hip isn’t bothering him and his swing feels great.

Woodland still hasn’t figured out the final stretch, Nos. 16-18, playing them in 3 over through two rounds. But he likes where he’s headed.

“I’ve seen some shots this week that I just haven’t seen in a long time,” he said. “The golf swing feels so much better. Confidence has gone way up, which I did not have really in the last year. … It’s exciting right now.”

Not so excited was Jon Rahm. He made a late charge until finishing with two bogeys for a 70 to miss the cut for the first time in 11 months.