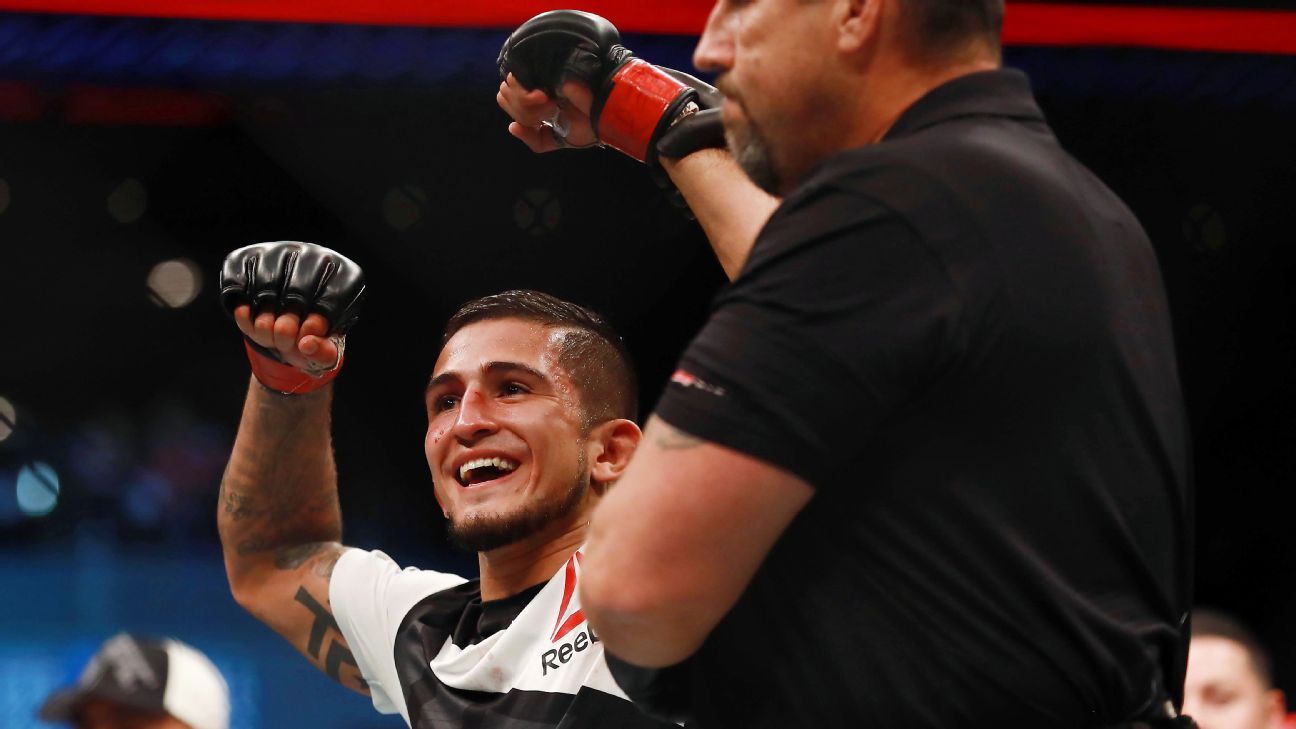 Sergio Pettis is officially out of the shadow of his accomplished older brother.

Using a technical and precise counter boxing game, Pettis outpointed Juan Archuleta to capture the Bellator bantamweight title in the main event of Bellator 258 on Friday night at Mohegan Sun in Uncasville, Connecticut.

Pettis won the bout via unanimous decision (50-45, 49-46, 49-46), an efficient and mature performance that saw him counter Archuleta expertly throughout. Pettis’ older brother Anthony is the former UFC lightweight champion and was once one of the most popular faces in MMA, earning a spot on a Wheaties box.

Anthony, who currently fights for PFL, was in his younger sibling’s corner Friday night for the big title win.

“He’s been telling me I’m one of the best in the world since I started this,” Pettis said in his postfight interview. “To join him and get this belt, it’s a dream come true.”

He certainly earned it. Pettis evaded Archuleta’s big combinations, angled out and landed crisp right hands over and over again throughout five rounds. None of the rounds were won by a wide margin, but Pettis picked his spots and landed flush often. In the second round, Pettis opened up a cut on Archuleta’s face with a right hand. It wasn’t the most flashy performance, but it was economical and certainly got the job done.

Archuleta’s best round came in the third. He landed hard shots and was able to evade Pettis’ counters. In the fifth, Archuleta picked up Pettis for a huge, hard slam. But Archuleta was not able to do much on the ground from there. Pettis had already done more than enough in that round and the previous four to emerge as the winner and new champ.

“I know my shots were hitting a little cleaner,” Pettis said. “He said there’s a storm coming and there would be heavy tides. But I was like water tonight, I was just flowing.”

Pettis (20-5) has won all three of his Bellator fights since signing as a free agent from the UFC in late 2019. In total, the Milwaukee native has won four straight and nine of his last 12.

Archuleta (25-3) won the title by beating Patchy Mix in a bout for the vacant belt last September. The California native has won 20 of his last 22 fights overall. Archuleta, 33, trains with the likes of former UFC bantamweight champion TJ Dillashaw, UFC featherweight title No. 1 contender Brian Ortega and veteran Cub Swanson.

Also on the Bellator 258 card, Anthony “Rumble” Johnson made his return to MMA a huge success — but it wasn’t easy.

Johnson knocked out short-notice opponent Jose Augusto at 1:30 of the second round in the co-main event Friday to advance to the Bellator Light Heavyweight World Grand Prix semifinals. He also earned a shot at the Bellator light heavyweight title, because his semifinal opponent will be champion Vadim Nemkov. A date has not yet been set for that bout.

Augusto gave “Rumble” all he could handle in the first round. After breaking his right hand on a punch that knocked against the top of Johnson’s head, Augusto dropped Johnson with a left hook and nearly finished him on the ground with a rear-naked choke. But Johnson survived, made it to the second round and landed a brutal right hand that put Augusto unconscious on impact.

Johnson (23-6), one of the scariest power punchers in MMA history, had not fought since a loss to Daniel Cormier in a UFC light heavyweight title bout in April 2017. This was the Florida resident’s first win since August 2016. Johnson, 37, came out of retirement and signed with Bellator last year.

In this bout, Johnson was supposed to fight fellow former multiple-time UFC title challenger Yoel Romero. But last week, Romero was forced to withdraw because he was unable to pass his pre-fight medicals.