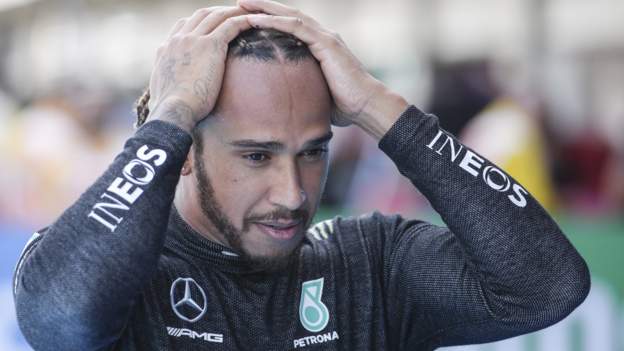 Lewis Hamilton said he was “proud” of the lap that took him to the remarkable milestone of 100 Formula 1 career pole positions, but that was only one of the emotions whirling through him as he celebrated this landmark, almost incredible, achievement.

“I don’t really feel like I can compute it right now,” he said. “It’s a huge number. I don’t know how I’m supposed to feel but I am excited it’s so close and it felt amazing.

“Qualifying is so special. When you come across that line and find you are just ahead. It’s such a big number it’s hard to express just how crazy and amazing it is.”

Hamilton has always said he is not one for statistics, but this clearly hit home. And no wonder. The Mercedes driver sits at the top of pretty much all the F1 statistical lists, but in this one his numbers are an order of magnitude bigger than anyone else’s.

While Hamilton digests the meaning of what he did at the Circuit de Barcelona-Catalunya on 8 May 2021, he might ponder that the next most successful man in qualifying in F1 history is Michael Schumacher. He scored 68 poles in his career. Hamilton has nearly half as many more again.

In terms of ratio, Hamilton is miles ahead of the German, whose record of wins he beat last year and whose seven world titles he tied and could well surpass by the end of this season.

Only Juan Manuel Fangio, Jim Clark and Ayrton Senna are ahead of Hamilton in percentage terms, and with the Brazilian – whom some still regard as the fastest ever F1 driver – Hamilton is virtually neck and neck, with pole at 37% of his races, as compared to 37.9% for Senna.

And then there is the figure itself. In some ways, 100 is just a number, but in many others it is not. A century has a resonance, a permanence – an impact. And it was not lost on Hamilton.

“The 100 mark is something that… I don’t think anybody, particularly me, thought I would ever get to that number,” he said.

“But when I think about it, I just think about all the people who have helped me get there. It is not only the amazing team I have here. It’s the incredible men and women back at the factories, who never cease to amaze me.

“We don’t get to see each other all the time but we are connected. There’s these great debriefs we have.

“This journey we have been on all these years has been remarkable. It has been so enjoyable. It’s crazy that it is 100 but it felt like one of the first. That for me is even more special. There have been so many qualifying sessions, so many near misses, so many mistakes, so many moments of growth.”

Was this a lap that was worthy of the achievement, this writer asked Hamilton afterwards; was it one to compare with his very best, such as his jaw-dropping pole lap in Singapore in 2018, or any of the several others that compete to be considered for the list?

It certainly looked like it might be. Red Bull’s Max Verstappen had been blisteringly fast in the second part of qualifying – 0.7secs quicker than Hamilton when they were on track at the same time, even if Hamilton improved with a second lap later in the session.

In the decisive top 10 shoot-out, Verstappen improved, but Hamilton and team-mate Valtteri Bottas made a bigger step, and the Briton was able to sneak ahead of the Dutchman by just 0.036secs.

“It was a great lap,” Hamilton said. “And it’s the journey. Sometimes in qualifying you are quick from the get-go and you have the right balance and then it is just down to you doing the job.

“I was making these changes and hoping that by Q3: ‘This is is all I’ve got, so make the best of it.’

“I do feel like it was a very, very clean and precise lap and I guess that’s how I’ve managed to be just ahead of Max. I’m proud of it, that’s for sure.”

At the end of the session, there was a lovely, human moment. By happy accident, the post-session interviews were conducted by former F1 driver Pedro de la Rosa, who goes back a long way with Hamilton.

The Spaniard was at Hamilton’s first test for McLaren back in the autumn of 2006 as the team were considering whether to promote their rising young star to F1, and was immediately blown away by his talent.

The two grew close through the following three years, when De La Rosa, who lost his seat to Hamilton, was McLaren’s test driver. And on Saturday the warmth between the two men was palpable.

“Hey, Pedro! How are you doing, man?” said Hamilton, clearly delighted to see his old colleague. “You’re not ageing too bad, huh?” And they had a little chat, Hamilton briefly appearing to forget they were going out live.

It put this writer in mind of an interview with De la Rosa last year as I was preparing a long-form piece on Hamilton to mark his seventh title. De la Rosa was talking about how the two were once very close, but that they inevitably did not see each other so much any more.

“I’m not in contact with him on a regular basis,” De la Rosa said, “I am not attending the races. But whenever I have met him in Barcelona, when he has been testing and I came to say hello, he was so nice to me. He was really sweet.

“Although I don’t have a daily contact with him, when I see him, I feel that it is the same Lewis, and he is the sweet boy I met when I was at McLaren and he was just a kid.

“With the people who have been with him somehow, fighting, working together, he still has a very genuine approach.”

De La Rosa also happens to be one of the most astute observers of racing drivers, and he has incredible insight into what makes Hamilton special.

Here he is explaining one of Hamilton’s greatest laps, at Canada in 2008. Hamilton was on pole by more than 0.6 seconds, and a remarkable 1.28 seconds quicker than team-mate Heikki Kovalainen.

“Lewis realised the track was opening up, bits of asphalt were breaking up in the corners,” De la Rosa said. “So he was turning in very early and using the banana kerbs and everything he could find to get the car turned. And he was faster than anyone else because he was adapting.

“He immediately found different lines. It’s not only about tyre temperature or driving style, it is about adaptability in general.

“The track is opening up, he doesn’t really go any slower, he just turns earlier and if there is a banana kerb, the car will jump, but he will have no problems with that as long as it lands on four wheels. So that’s Lewis, man. It doesn’t really matter what you throw at him, he will drive fast.”

On Saturday, Hamilton’s team boss Toto Wolff summed events up like this: “Every time, I get asked: ‘Was this his best lap or best race?’ He is just operating on this extremely unseen, never seen level.

“Today probably the car wasn’t perfect and he just edged the other ones out and 100 poles is incredible.

“(Mercedes trackside engineering director) Andrew Shovlin was just saying that if you put all his pole laps together in a video it would last two hours. And that just shows what he has achieved.”