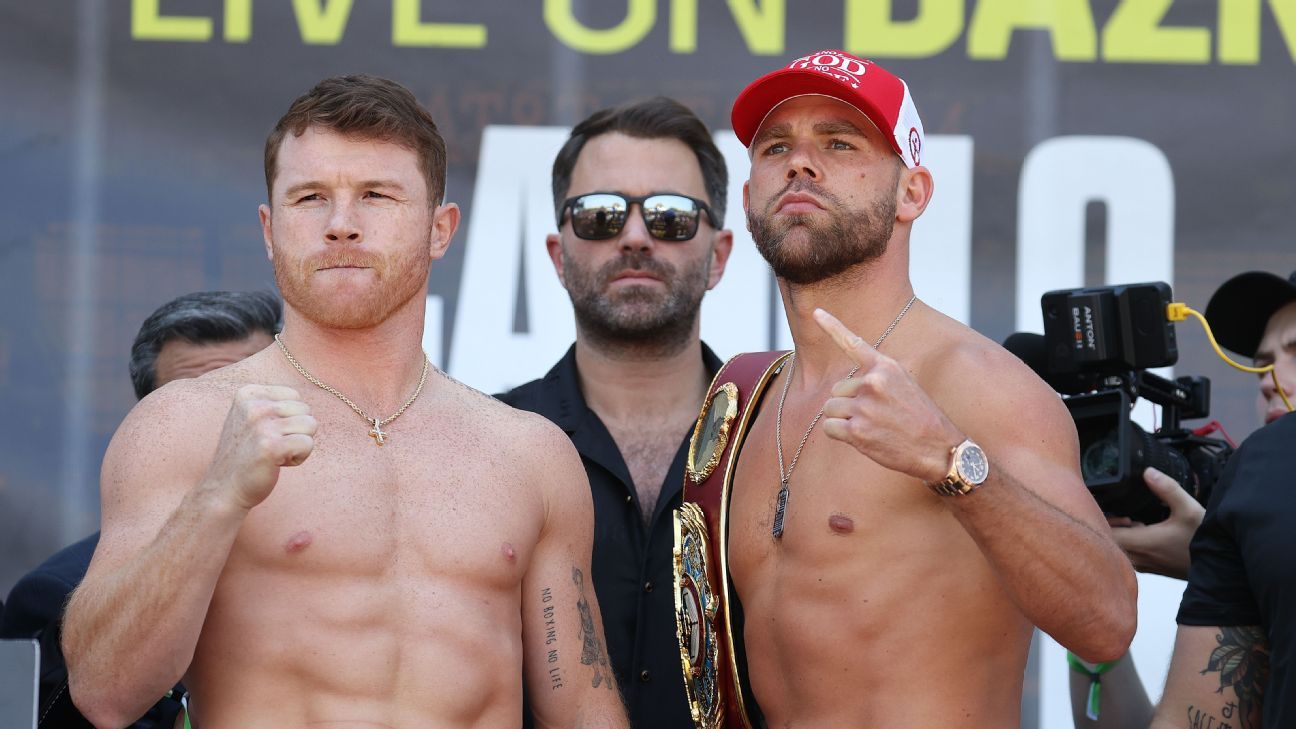 Canelo Alvarez and Billy Joe Saunders will fight in front of 65,000-plus fans at AT&T Stadium — home of the NFL’s Dallas Cowboys — in Arlington, Texas on Saturday, with three of the four major super middleweight world titles on the line. Alvarez, who owns the WBC and WBA belts, and Saunders, the WBO champion, were scheduled to fight in 2020. But the coronavirus pandemic, and a controversial video Saunders posted to social media that saw his boxing license suspended, forced the fight to be delayed.

Alvarez (55-1-2, 37 KOs), 30, of Mexico, won the WBA title with a third-round TKO of Rocky Fielding in December 2018. He added the then-vacant WBC belt with a dominant unanimous decision over Callum Smith this past December.

If Alvarez defeats Saunders on Saturday, the next step is already in motion.

“We have always been open about what are short- and long-term plans have been,” said Alvarez the day he arrived in Dallas for the fight. “I want to unify the 168-pound division, and Caleb Plant would be next in line to secure that short term goal if successful against Billy Joe Saunders.”

Saunders (30-0, 14 KOs), 31, of England, won his WBO belt in a decision victory over Shefat Isufi in May 2019 and has defended the belt successfully twice — in a KO victory over Marcelo Coceres six months later, and a decision win over Martin Murray in December.

Saunders praised Alvarez during a news conference on Thursday, but said this is his time, and he’s ready to seize the opportunity.

“I can’t talk what he’s done down, he’s done brilliant things for boxing,” Saunders said of Alvarez. “He’s a good champion, but like I said, there’s a time in life where you get tested, sometimes when you forget where come from and forget all those hard things that’s brought you to where you’re at sometimes that can make it difficult on yourself. I think he’s going to be bumping into the wrong man Saturday night to be going home with titles. I’m looking forward to a very good fight but most definitely the win.”

Kelvin Davis avoided a pretty significant upset with a narrow unanimous decision over Jan Marsalek. Davis (2-0, 1 KO) was knocked down in the last minute of the four-round bout. Marsalek caught Davis, who fights out of Norfolk, Va., with a big right hook that put him on the canvas. Davis’ straight punches won him the first three rounds, which kept him undefeated.as he squeaked out the victory.

Marsalek produced the biggest moment of the super lightweight bout with brilliant boxing. Right before the knockdown, the shorter fighter from the Czech Republic kept winging left hooks that Davis dodged. Marsalek’s decision to unleash the right nearly won him the fight. But by the time Davis got off the deck, there wasn’t enough time for Marsalek to truly pounce on Davis, who was still hurt.