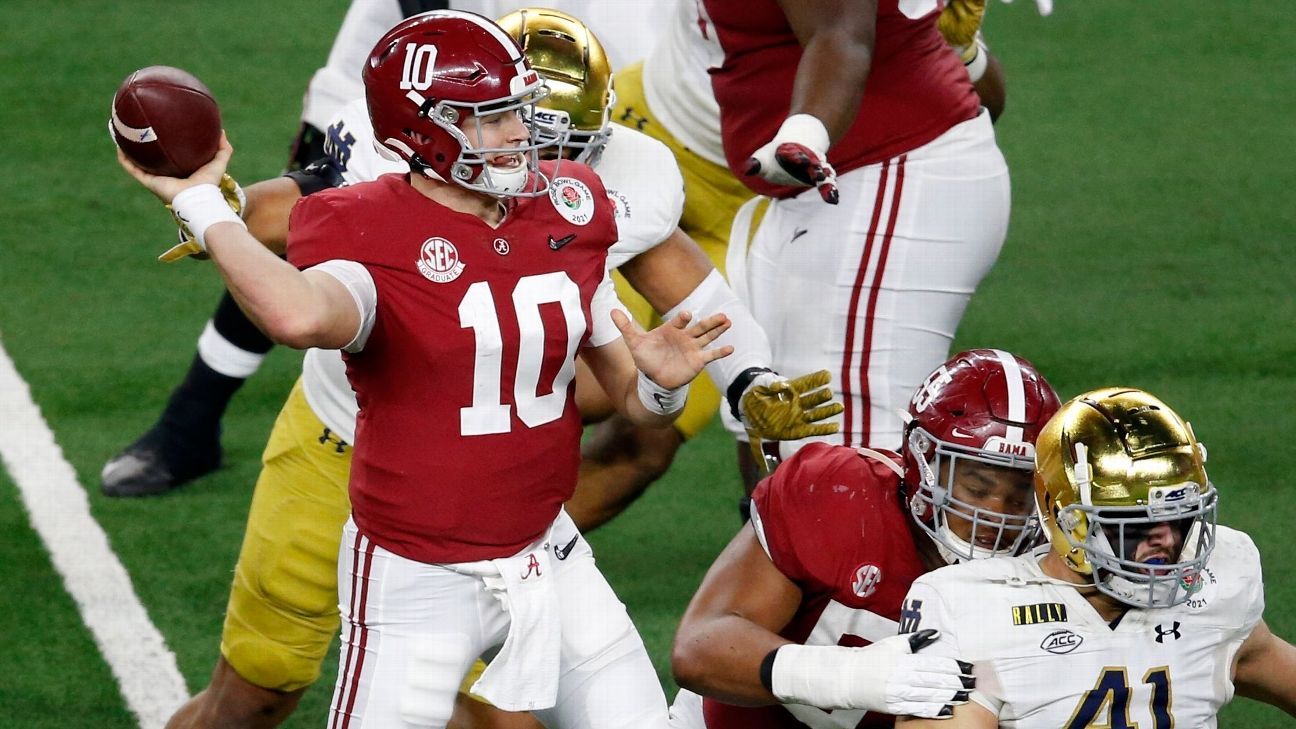 1. QB contrast: Sixteen years ago, coach Bill Belichick said something that highlights one of the more fascinating topics surrounding his current Patriots team. How can two quarterbacks with such contrasting styles of play — Cam Newton and Mac Jones — co-exist and thrive in the same offensive system?

Belichick’s 2005 Patriots team was preparing to face the Michael Vick-led Atlanta Falcons, and he was asked to revisit how much interest he had in the speedy Vick in the 2001 draft.

“He’s a very unique player, and if that’s the player you select, you have to make a commitment to that style of play,” he said at the time. “I don’t think he’s going to play the game like some other quarterbacks. I don’t think some other quarterback is going to play the game like him. If that’s what you have, then I think you, at least to a degree, accommodate your system to him and build with it.”

The Patriots had Drew Bledsoe as their top quarterback (he would sign a contract extension before the draft), with Damon Huard the No. 2 and Tom Brady behind him (few projected his emergence into stardom at the time).

What you need to know about the New England Patriots:

He has declared Newton the team’s quarterback (for now), but the selection of Jones at No. 15 overall in the 2021 NFL draft represents a commitment to the type of system the Patriots want to run (e.g. traditional passing game, rhythm thrower, etc.) — and that isn’t necessarily Newton’s forte.

A case could be made that no team in the NFL has a greater contrast, in terms of how their top quarterbacks play, than New England.

How Belichick and offensive coordinator Josh McDaniels strike a balance, and put both Newton and Jones in the best position to have the greatest success in the short- and long-term, will be compelling to watch.

Michael Lombardi, a former Patriots assistant to the coaching staff, shared insight on the potential approach in his “GM Shuffle” podcast when he said: “Mac Jones can’t run the power out of shotgun. Mac Jones isn’t going to run the quarterback sweep. So there are going to be two different offenses here, but there is going to be the same passing game. This is what I think people disconnect a little … The running game — the position of accounting for the quarterback in the running game — will be somewhat different.”

2. Ernie’s ‘famous’ pick: In a behind-the-scenes peek inside the Patriots’ draft room posted on the team’s official website, Belichick saluted football research director Ernie Adams as he concluded his final draft before retirement, while referencing his “famous David Givens selection” from 2002. That naturally sparked the question: What made the seventh-round selection so famous?

Part of the story is that the Patriots were scheduled to pick 244th, but passed on making the pick. A team passes when it doesn’t make a selection in the allotted time period, and the pick then defers to the next team in the order. The initial team may then at any point make a pick, regardless of whether the subsequent team has made a pick.

“Ernie was given a stack of books, and he pulled David Givens out. That was a pretty good pick,” Belichick said in the video, a reference to Givens being a key contributor in the team’s 2003 and 2004 Super Bowl championships.

After four decades of impact on the game, Ernie Adams does the honors for the final pick of his final #PatsDraft. pic.twitter.com/fPbBZ9WRt9

As for why Adams landed on Givens, there might be even more to the story, and Adams has plenty of those tales from his decades with the franchise.

That was also the day the Patriots traded quarterback Drew Bledsoe to the Buffalo Bills, so the passing of the pick from 244 to 253 — and the ultimate selection of Givens — was more of a “passing” note in media reports.

3. Offseason program: One member of the Patriots who has been at voluntary offseason workouts estimates that more than 50 players have been present. Since players arrive at different times over the course of the day, it’s a series of small groups, but one common thread that was relayed was that it has helped establish a competitive culture in the weight room. Longtime captain Matthew Slater, who in some ways is the heartbeat of the locker room, is the longest tenured player on the roster, and he’s been a regular. Slater is scheduled to answer questions from reporters on Tuesday.

4. Stevenson’s hands: Patriots national scout Matt Groh provided insight on the team’s draft picks in an exclusive event for season-ticket members last week, and one point he made about running back Rhamondre Stevenson — the fourth-round pick from Oklahoma — is that he has “soft hands.” Stevenson was one of the bigger running backs in the draft (5-foot-11 and 227 pounds) with a knack for finishing runs with authority, and since he wears No. 29, it was natural to make the connection to former Patriots bruiser LeGarrette Blount’s hard-charging running style. But Stevenson’s “soft hands” (18 receptions in 2020) also could make him a potential option in pass-catching situations.

5. Bledsoe’s evaluation: Groh highlighted tape of Missouri safety Joshuah Bledsoe, one of the team’s sixth-round picks, and noted how scouts’ evaluations were aided by seeing the former basketball point guard match up against top players regularly without a lot of help — from showing situational awareness on a fourth-down, game-winning play against LSU receiver Terrace Marshall, to defending Florida’s Kadarius Toney (receiver) and Kyle Pitts (tight end) and Alabama receivers Jaylen Waddle and DeVonta Smith. “They asked this guy to cover everybody,” Groh said. “That’s great in us trying to make our evaluation on a player to see him against the guys that are going to be in the NFL.”

6. Rookie blackout: The Patriots are scheduled to hold their rookie minicamp May 14-16, but it won’t be open to non-team-employed reporters. Some teams open their camps to reporters, but Belichick — who isn’t one to promote the hype — is happy to keep it behind closed doors.

7. Dugger’s top test: With most of the media attention focused on the Patriots 2021 draft picks as the newest players to join the team, not to be overlooked are the strides the team is hoping to see from its 2020 class led by safety Kyle Dugger (51% playing time as a rookie). Dugger was interviewed last week as part of an exclusive event for season-ticket members and called fourth-year Ravens tight end Mark Andrews (58 catches, 701 yards, 7 TDs) his toughest matchup last year. “Really crafty and he knew how to take advantage if you were out of position or made a technical mistake with your hands,” he said.

8. Brady’s return: The NFL will release its full 2021 regular-season schedule on Wednesday, and two of the top questions TV executives figure to be asking are, “Who gets the Buccaneers at Patriots game?” and “When will it fall on the schedule?” There might be some similarities between the old Brady-Peyton Manning/Patriots-Indianapolis Colts duels which used to be locked in for November because executives strategized it would help produce the biggest ratings during a key TV sweeps time. From 2003-2011, there were nine Patriots-Colts regular-season games — seven were in November and one in the first weekend of December.

9. They said it: “I think you have to be excited looking at it. There are certain limitations of things we can do practice-wise right now, but we’re trying to do everything we can to make this football team better. Now it comes down to the stuff people don’t want to talk about — how much work we put in over the next three-four months. We made a lot of improvement on paper, that’s definitely a part of it, but now we have to become a football team.” — starting center David Andrews on the Patriots’ aggressive offseason.

10. Did You Know: With 10 players drafted in 2021 — which includes top Patriots selections Jones and defensive tackle Christian Barmore — Alabama has had 51 players selected over the past five drafts. That ties USC (1973-77) for the most NFL draft picks over any five-year span in the common draft era (since 1967). Per Elias Sports Bureau, Alabama is the third school in NFL draft history to have at least 50 players selected over a five-year span, joining USC and Notre Dame.