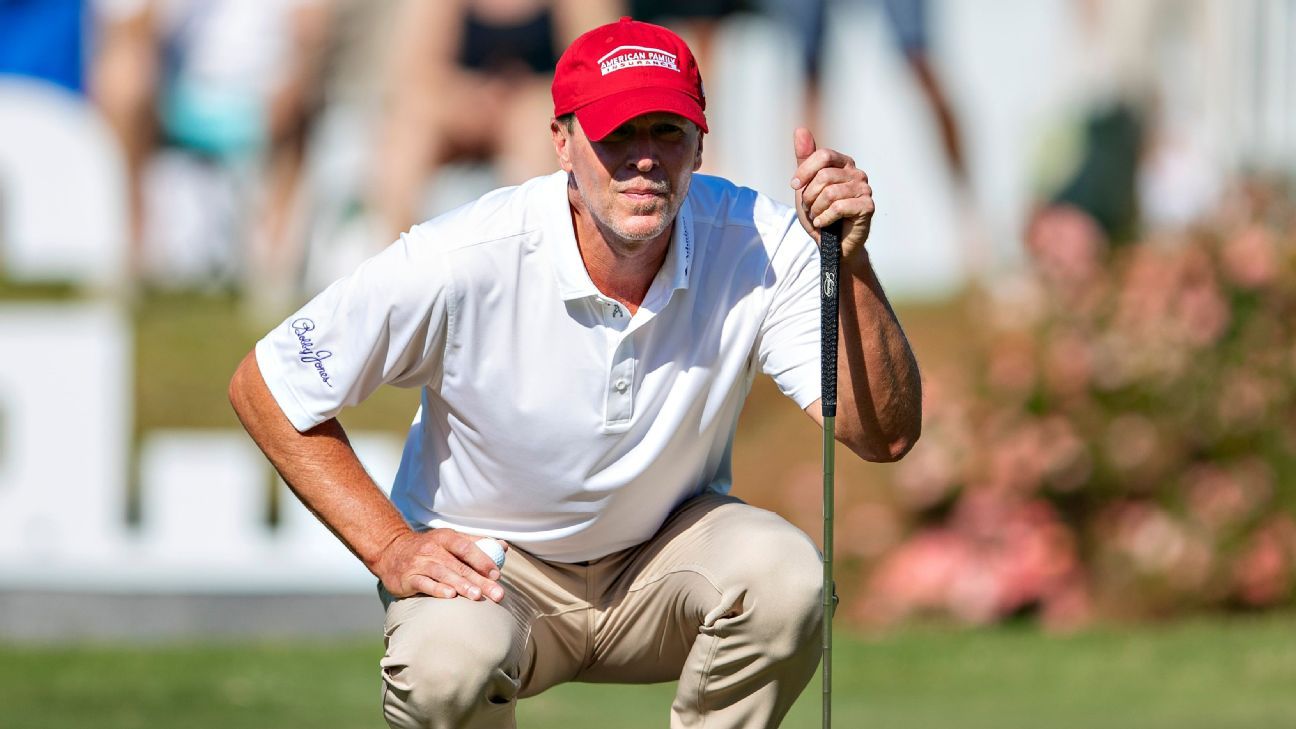 BIRMINGHAM, Ala. — Defending champion Steve Stricker made a long eagle putt on the final hole for 7-under 65 and the third-round lead Saturday in the Regions Tradition, the first of five PGA Tour Champions majors.

Stricker moved a stroke ahead of Alex Cejka with the eagle that got him to 14-under 202 at Greystone Golf & Country Club. Cejka, who made the field as the first alternate Monday, bogeyed the 17th in a 66.

Stricker, who won the Alabama major the last time it was held in 2019, raised his fist toward the fans just an instant before the eagle putt dropped in on the closing par 5. Cejka two-putted for par.

“I hit a good drive,” Stricker said. “And I had a number that I really had to hit a good hard utility club. I had to really turn it over. And it just worked out really nicely. Had a nice look at it. Made a good putt.”

It was shades of Friday when Stricker moved into a four-way share of the lead with a birdie on No. 18. He ran his bogey-free streak to 28 holes.

“Winning here a couple years has given me confidence that I can play well around here,” Stricker said. “We had a great day to play. And there’s a lot of good players up around the top.

“I’m going to have to go out, take care of business tomorrow, and put up another good round like I did today. And Alex played great. It was fun to watch him.”

Cejka is in contention again after tying for second in the Chubb Classic as a Monday qualifier.

“Steve made a lot of putts, especially down the stretch,” he said. “The eagle was incredible. I mean, two great shots to the green and holed the putt.

“I three-putted the 17th hole and didn’t get up and down on 18. A little bit disappointing, but overall I played great. I had a lot of chances. I would like to play like this (Sunday), just give me a lot of chances, make a few putts and I’m super happy to be in that position going into the last day.”

The Czechoslovakia-born Cejka, who grew up in Germany after escaping his home country with his father, made six birdies in a seven-hole stretch in his third start on the 50-and-over tour.

“He took a little boy by his hand and escaped Communism,” Cejka said. “It could have gone the other way. We ended up in Germany. He tried to give me a new, good, better life.”

Robert Karlsson and Dicky Pride, a resident of nearby Tuscaloosa playing courtesy of a sponsor exemption, were three shots back. Karlsson shot a 64 and Pride a 67, with seven birdies and two bogeys.

Pride is trying not to dwell on what a win would mean for him.

“Honestly, that’s stuff I can’t do anything about,” he said. “I can’t take care of that. I have to take care of what I’m doing. And that other stuff, that just gets you thinking about things you can’t control.”

Cejka and Stricker shared the second-round lead with Jerry Kelly and Darren Clarke. Kelly shot a 70 and Clarke a 71.

Cejka took the solo lead with long birdies on Nos. 11 and 12, hitting it off the flag on the 12th hole where he had made his first bogey of the tournament on Saturday. He teed off out of order on 17, driving first and wound up with the bogey No. 2.

Karlsson birdied four of the five par 5s and came close to making it 5 for 5 on the long holes. The 6-foot-5 Swede two-putted for par on No. 18 from about 4 feet.

“I hit one in the water on 11 and I managed to make a par from there, so it was great to keep the momentum going,” Karlsson said.

Two-time winner Bernhard Langer was six strokes back after highlighting a 69 round with an eagle on the par-5 15th.