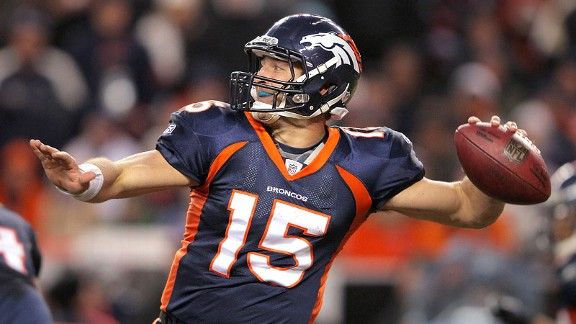 Welcome back to the NFL, Tim Tebow.

Nine years years after his final regular season game — and more than 300 minor league baseball games later — Tebow, 33, is expected to sign a one-year deal with the Jacksonville Jaguars, likely to play tight end. Tebow’s first stint in the league lasted 35 games, where he threw for 17 touchdowns, nine interceptions and 2422 yards. Famously, Tebow tossed an 80-yard game-winning touchdown in the 2011-12 playoffs to defeat the Pittsburgh Steelers, but his low completion percentage kept him from sticking in the league for long.

While he won’t be playing quarterback, considering the Jaguars just signed Trevor Lawrence, Tebow does have significant athletic gifts that allowed him to compete at a high level in both football and baseball. Regardless, it’ll be interesting to see how his second stint in the league plays out.

Tebow’s return has us taking a look at other athletes’ notable comebacks from long layoffs due to injuries, personal reasons and retirements.

First run: Montana established himself as one of the greatest QBs of all time in his career with the San Francisco 49ers, winning four Super Bowls and two MVPs.

What happened: Montana missed all of 1991 and most of 1992 with an elbow injury. After Steve Young took over his place as the 49ers’ starter, Montana requested to be traded and was sent to the Kansas City Chiefs.

Second wind: Montana led the Chiefs to the AFC Championship Game in 1993.

First run: Manning won four MVPs and a Super Bowl in his career with the Indianapolis Colts, who drafted him in 1997.

What happened: Manning missed the entire 2011 season with a neck injury, which effectively ended his career with Indy.

First run: Williams, the 1998 Heisman Trophy winner at Texas, had numerous stints in the league after being drafted fifth overall in the 1999 NFL draft by the New Orleans Saints. He was the NFL’s rushing leader in yards in 2002 with the Miami Dolphins and made the Pro Bowl that year.

What happened: Williams retired for the first time in 2004 after multiple failed drug tests. He returned in 2005, but then was suspended in 2006. He returned to the NFL again, in 2007 with the Dolphins.

First run: Vick was drafted first overall by the Atlanta Falcons in 2001 and immediately electrified them, making three Pro Bowls while on the team from 2001 to 2007.

What happened: In 2007, it all went downhill. Vick pleaded guilty for his involvement in a dogfighting ring and his public image took a huge hit. He spent 21 months in jail.

Second wind: Vick signed with the Philadelphia Eagles in 2009. He made a Pro Bowl in 2010 and won the NFL’s Comeback Player of the Year Award that season.

First run: As a freshman at Pittsburgh in 2013, Conner led the Panthers in rushing, and he followed that with a sophomore season that saw him lead the ACC in rushing. His rushing yards ranked seventh in the FBS that year.

What happened: During the 2015 season opener, Conner tore his MCL. The crushing injury led to Conner being diagnosed with Hodgkin lymphoma during his rehab. But the catch allowed him to fight the cancer — and win.

Second wind: Conner returned to the field for Pitt in 2016, and entered the 2017 NFL draft, where the Pittsburgh Steelers picked him. He played 14 games in his rookie season as Le’Veon Bell‘s backup.

First run: Having been part of a World Cup-winning squad as a 17-year-old in 1994, Ronaldo established himself as arguably the greatest player. He averaged almost a goal per game for PSV Eindhoven and Barcelona over three seasons and won the Ballon d’Or in 1997, the same year he joined Inter for a world record fee of $27 million. During his first season in Italy, he scored 34 goals and won the UEFA Cup.

What happened: But after he scored four times in Brazil’s run to the final, the decider versus France began a personal nightmare. Ronaldo played in the 3-0 defeat to the host nation amid rumors regarding his health and was left off the original team sheet. What followed in subsequent years was even worse and led to legitimate fears that the great striker’s career might be over. In April 2000, six minutes into his first game following a five-month absence due to a ruptured knee tendon, Ronaldo suffered a relapse that would see him sidelined for 17 months. How bad was the injury? “His knee-cap actually exploded and it ended up in the middle of his thigh,” his former physio Nilton Petrone said.

Second wind: In 2002, sporting a curious haircut that, he said, was designed to distract the media from asking about his dodgy knees, O Fenômeno scored eight goals in seven games, including two in the final versus Germany, to lead the Selecao to a record fifth world title.

First run: Hamilton, a highly touted prospect, was the No. 1 pick in the 1999 MLB draft by Tampa Bay.

What happened: He didn’t debut in the majors until 2007, with the Cincinnati Reds. What happened in between? Drug and alcohol abuse led him to rehab, and he was out of baseball for almost three years.

First run: Wood, then a Chicago Cubs rookie, had 20 strikeouts in his fifth career start in 1998, against the Houston Astros and was named NL Rookie of the Year in 1998.

What happened: He missed the entire 1999 season to Tommy John surgery. After the 2004 season, Wood was primarily a reliever, with multiple DL trips and injuries throughout his career.

Second wind: He was an All-Star selection in 2008, his last season with the Cubs, and had 34 saves that season.

First run: After making his MLB debut in 2005 with the Chicago Cubs, Hill bounced around six different teams, with varying results and injuries through 2014.

What happened: With mixed results and injuries keeping Hill from sticking in the majors, he signed with the Atlantic League’s Long Island Ducks in 2015.

First run: Bush, a highly ranked shortstop prospect, was selected first overall by the San Diego Padres in the 2004 MLB draft. His big league debut, however, wouldn’t happen for another 12 years.

What happened: Personal and legal problems, along with a prison stint, got in the way. His career started on a suspension after a bar fight. In 2009, he assaulted two lacrosse players. That same year, he also reportedly threw a baseball at a woman’s head. In 2012, when he was drunk, he ran over an elderly man. He bounced around with organizations including the Padres, Toronto Blue Jays and Rays before the Rangers signed him to a minor league contract in 2015.

First run: This comeback doesn’t even include Venters being drafted in 2003 and not making his debut until 2010 with the Atlanta Braves (which included recovery from Tommy John surgery in 2005). But he finally did make it then, tying for eighth in NL Rookie of the Year voting. He followed that up with a solid 2011 season.

Second wind: Finally healthy, he debuted for his new team, the Rays, in April 2018. In July 2018, he was traded back to the Braves.

First run: Magic was Magic. The No. 1 pick in the 1979 NBA draft, he won the NBA Finals and Finals MVP his rookie season. That title was the first of five with the Los Angeles Lakers. He also won three MVPs and two more Finals MVPs and was a perennial All-Star.

What happened: Johnson retired in 1991 after his announcement that he was HIV-positive, though he did play in the 1992 All-Star Game and was on the 1992 Olympic Dream Team.

First run: Livingston was a top high school prospect and was picked at No. 4 by the Los Angeles Clippers in the 2004 NBA draft. He suffered a devastating knee injury in 2007 that looked like a potential career-ender.

What happened: He was out for around a year-and-a-half, then played for numerous NBA teams, including a stint in the then-D-League (now G League).

Second wind: In 2014, Livingston joined the Golden State Warriors, and he has been a key part of their three NBA titles since then.

First run: George was an All-Star in 2013 and 2014 and made the All-NBA third team those same seasons. He also made the NBA All-Defensive first team in 2014. He led the Indiana Pacers to back-to-back Eastern Conference finals.

What happened: George suffered a horrific knee injury during a scrimmage for the FIBA Basketball World Cup and missed almost the entire 2014-15 season.

First run: Lemieux won back-to-back titles with the Pittsburgh Penguins in 1991 and 1992, winning the Conn Smythe Trophy both years. In 1993 he was diagnosed with Hodgkin lymphoma, causing him to miss two months of the season as he received treatment. When he returned, the Penguins won 17 straight games and won the scoring title.

What happened: Lemieux missed the majority of the 1993-94 season with back problems. He took a leave of absence during the 1994-95 season because of fatigue from radiation.

Second wind: He came back for the 1995-96 season and won the Art Ross Trophy as MVP, continuing to cement himself as a hockey Hall of Famer.

First run: Foreman won the heavyweight championship when he knocked out Joe Frazier in 1973. He retired (for the first time) in 1977.

What happened: After he retired for the first time, he became an ordained Christian minister.

Second wind: Foreman came back in 1987 after a 10-year layoff. In 1994, 21 years after his first heavyweight championship, he regained a portion of it.

First run: In 1991, Capriati was a semifinalist at Wimbledon and the U.S. Open. She also won a gold medal at the 1992 Olympics.

What happened: She took a break from tennis for personal reasons and legal troubles (shoplifting and marijuana charges) and returned in 1996.

What happened: In 1993, a fan of Steffi Graf stabbed Seles in the back with a knife, and Seles would be out of tennis until 1995.

Second wind: In 1996, she came back and won the Australian Open. She was inducted into the Tennis Hall of Fame in 2009.

What happened: Tough rivals, old age. Perhaps a combination. Following his victory at Wimbledon in 2012, Federer went nearly five years without a Grand Slam win. In 2016, Federer took a six-month hiatus from the game to repair a lingering knee injury.

Second wind: Federer returned at the 2017 Australian Open, and voila. He won it. Then won Wimbledon a few months later. Then won the 2018 Aussie Open. Currently, Federer is ranked No. 4 in the world.

First run: His 6 sixes and becoming the fastest fifty in Twenty20 Internationals were only part of Singh’s accomplishments early in his career.

What happened: In 2011, Singh was diagnosed with “mediastinal seminoma,” a germ-cell tumor located between his two lungs. He underwent three cycles of chemotherapy.

Second wind: A few months later, Singh was discharged from hospital. He made a momentous comeback to cricket at the 2012 World T20 and ended up as India’s highest wicket-taker in the tournament. Five years later, he scored a career-best 150 to help India win an ODI series against England.

What happened: Injuries, scandal and surgeries left Tiger a shell of his former self, and it looked like he’d be stuck at 14 forever.

Second wind: Tiger refused to give up, and his tournament results kept gradually improving until finally, in 2019, he won his fifth Masters tournament. Now, in the wake of his devastating car accident, Tiger may have to start all over again..