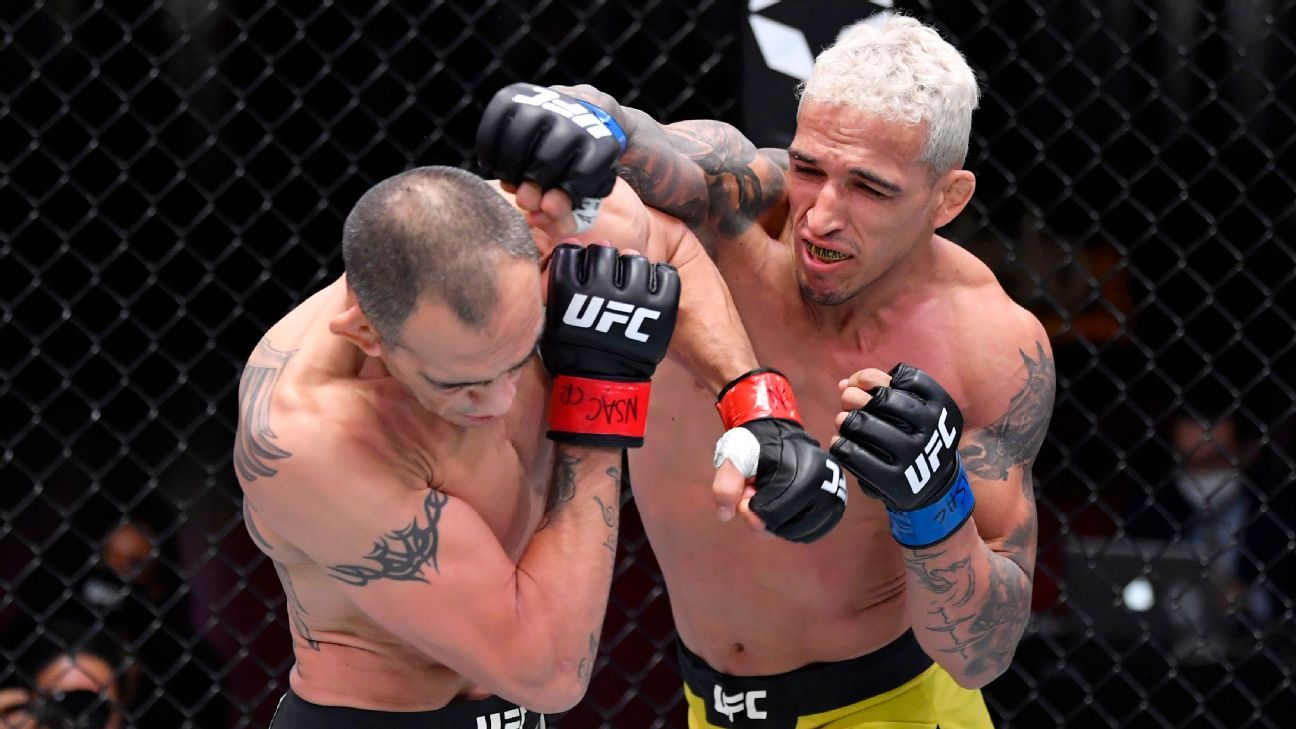 UFC 262 will usher in a new era in the lightweight division. It’s been more than three years since anyone other than Khabib Nurmagomedov wore the UFC lightweight belt around their waist.

With the 29-0 Nurmagomedov officially retired, the impressively deep lightweight division is ready to crown a new king. Barring a draw or another unlikely circumstance, Charles Oliveira or Michael Chandler will claim that mantle on Saturday at UFC 262 at the Toyota Center in Houston, where they will meet in the main event for the vacant championship.

Oliveira made his name as the most effective submission fighter in UFC history with a record 14 submission wins out of 18 total victories. But during his current eight-fight winning streak, he’s shown more depth to his fighting arsenal. Is it time to stop simply labeling him as a submission fighter?

The UFC heads back on the road for another full capacity crowd at UFC 262 at the Toyota Center in Houston. The evening will focus on the future of the lightweight division as Charles Oliveira and Michael Chandler fight for the UFC lightweight title vacated by Khabib Nurmagomedov.

Chandler stormed into the UFC with a first-round knockout of Dan Hooker in January. The three-time Bellator lightweight champion has a chance to win UFC gold in just his second fight with the promotion. How far would a victory go in proving elite star power exists outside the walls of the UFC?

In the co-main event, Tony Ferguson looks to start rebuilding toward a lightweight title shot of his own. His 12-fight win streak is a thing of the past, but can he still get back to a level where he can finally challenge for the true world title? Ferguson has lost his last two fights and faces a tough test when he takes on Beneil Dariush. Is Ferguson destined to be known as the greatest lightweight never to win the belt?

Finally, middleweight Edmen Shahbazyan isn’t taking an easy or intermediate path towards his goals after dropping the first loss of his promising career to Derek Brunson in August 2020. He’s jumping back into the fire against Jack Hermansson on the UFC 262 main card. Hermansson was knocking on the door of a title shot before losing two out of his last three fights against Jared Cannonier and Marvin Vettori. Is the 23-year-old Shahbazyan facing the right kind of opponent in Hermansson?

Our panel of Ariel Helwani, Brett Okamoto, Marc Raimondi and Jeff Wagenheim breaks down some of the biggest questions leading into UFC 262 fight week to determine what’s real and what’s not.

Despite holding the UFC record for most submission wins, Charles Oliveira is more than a submission fighter.

Okamoto: Real. If you’re still thinking Oliveira is nothing more than a talented submission ace who will struggle to find another path to victory, you haven’t been paying attention.

The most impressive thing about Oliveira’s eight-fight win streak, to me, has been his striking. He looks as comfortable on the feet as he does on the ground, which is really saying something.

He’s ultra-aggressive, but not to the point of being reckless, and he’s shown real power. Not many of us would have ever guessed this grappling specialist, who used to fight at featherweight, would turn into such a dangerous striker at 155, but Oliveira has real finishing ability. If he hurts Chandler on the feet and it leads to him winning a UFC championship, it will be a major statement, but he won’t have proven anything new. We know he’s capable of that right now.

Michael Chandler will prove there are fighters outside of the UFC who could win a title in the promotion.

Wagenheim: This is real, and even if Chandler doesn’t win the lightweight belt on Saturday, it’ll still be real. That is not to deny the UFC’s status as top dog among MMA promotions. Its roster overflows with most of the best fighters in the world. Just take a look at ESPN’s MMA rankings, division by division, and you’ll see that only a few top-10 fighters compete in a cage that’s not shaped octagonally.

How few? Of the 110 available positions in the rankings — top 10s in eight men’s divisions and three women’s — only 14 spots are filled by non-UFC fighters. Four divisions are all UFC, top to bottom. The most promotional diversity lies in two weight classes — light heavyweight and women’s flyweight — that have three Bellator fighters in the top 10. Thirty percent representation isn’t exactly a coup d’état.

But don’t tell me Bellator double champion Patricio “Pitbull” Freire, who knocked out Chandler two years ago, would have no shot against Saturday’s title fight winner or UFC featherweight champ Alexander Volkanovski. Don’t tell me One Championship flyweight titlist Adriano Moraes, last seen knocking out Demetrious Johnson, wouldn’t stand a chance against the UFC’s Deiveson Figueiredo — or that “Mighty Mouse,” the greatest 125-pounder ever, absolutely, positively couldn’t get the job done against Figueiredo, either.

The outsiders would all be underdogs against their UFC counterparts, I imagine, just as Bellator’s three ranked light heavyweights — champ Vadim Nemkov, Corey Anderson and ex-champ Ryan Bader — would be against the UFC king Jan Blachowicz. But it would be narrow-minded to count them out. Blachowicz did knock out Anderson last year, but a different night could produce a different result.

We’ve seen what happens when big-name UFC fighters go to other promotions. We expect them to dominate, and sometimes it just doesn’t work out that way. That has been the case for Johnson and Eddie Alvarez in One and for Anthony Pettis and Fabricio Werdum in the PFL. There are some excellent fighters out there in the world. The UFC has most of them. But not all.

Tony Ferguson will go down as the best lightweight never to win a title.

Raimondi: This is a very tough one, because obviously Ferguson is still active, and a win Saturday will keep him in the title mix. Ferguson, though, is a slight underdog against Dariush. It’s easy to see why. He has not quite looked like himself in two straight losses, one to Justin Gaethje and most recently against Oliveira last December at UFC 256. Gaethje and Oliveira are both in the title mix, so if Ferguson has already lost to them, it won’t be easy for him to climb his way back up there. Now, if anyone can do it, it’s Ferguson. But we have to be realistic. He’s 37 years old now. The greatness that he achieved in the cage could be waning.

So, with all that in mind, I’m going to say real to this statement. Ferguson absolutely must be recognized for all that he has accomplished in the UFC. Nurmagomedov is regarded as the best lightweight in MMA history. There is no argument there. But consider this: Ferguson is tied with Nurmagomedov for the longest winning streak in division history (12). And in those 12 straight victories between 2013 and 2019, Ferguson had nine finishes — more than Nurmagomedov’s seven.

Ferguson is the former interim UFC lightweight champion, and it is an absolute crime that he never even fought for the chance to win the undisputed title. Some of the circumstances around Ferguson being deprived of that opportunity are beyond belief, including tearing his knee a week out of one opportunity during a media tour. He was scheduled to fight Nurmagomedov five times, and each time the fight fell through, including last year because of the COVID-19 pandemic.

Nurmagomedov is retired now, so the most anticipated fight in lightweight history will almost certainly never happen. It’s not fair to Ferguson that he never got the chance to challenge himself against Nurmagomedov. In their primes, many felt Ferguson had the skillset to dethrone the undefeated champion.

It’s easy to look back on Ferguson’s career with regret, but I’d rather do so with honor and appreciation. The man was — and is — must-see television. He won six Fight of the Night bonuses, including a stretch of five in six fights, and he won The Ultimate Fighter 13. Ferguson’s UFC record is 15-3. “El Cucuy” has had a Hall of Fame-worthy career. And yes, if things stay on the current path, he will be the greatest MMA lightweight to never win the title — and the greatest to never even fight for the undisputed gold.

Jack Hermansson is the right opponent to get Edmen Shahbazyan back toward top prospect status.

Now, I know, this could sound really dumb in about six days, and let me also add I am looking forward to the matchup. But there’s no way the very dangerous Hermansson, who was seemingly knocking on the door of a title shot a few months ago, is the right opponent for a 23-year-old coming off his first pro loss. How can that possibly be real?

I mean, Shahbazyan could literally fight anyone next. Why the No. 7-ranked guy? Hermansson, who is also coming off a loss and will no doubt have a chip on his shoulder as he looks to get back on a track, is a tough out for anyone. I didn’t understand the booking from Shahbazyan’s perspective from the moment this fight was announced until now. When it comes to a young fighter coming off his first loss — not to mention a TKO loss — I prefer taking a step back in competition to build his/her confidence back up. But, as we know, there are rarely tuneup fights in the UFC. That has just never been a part of their model.

And again, I’m excited for the fight. It’s the third-most intriguing fight on the card. And watch Shahbazyan score some kind of impressive finish against the veteran proving this answer to be completely wrong in less than a week. After all, that’s why we watch the fights.