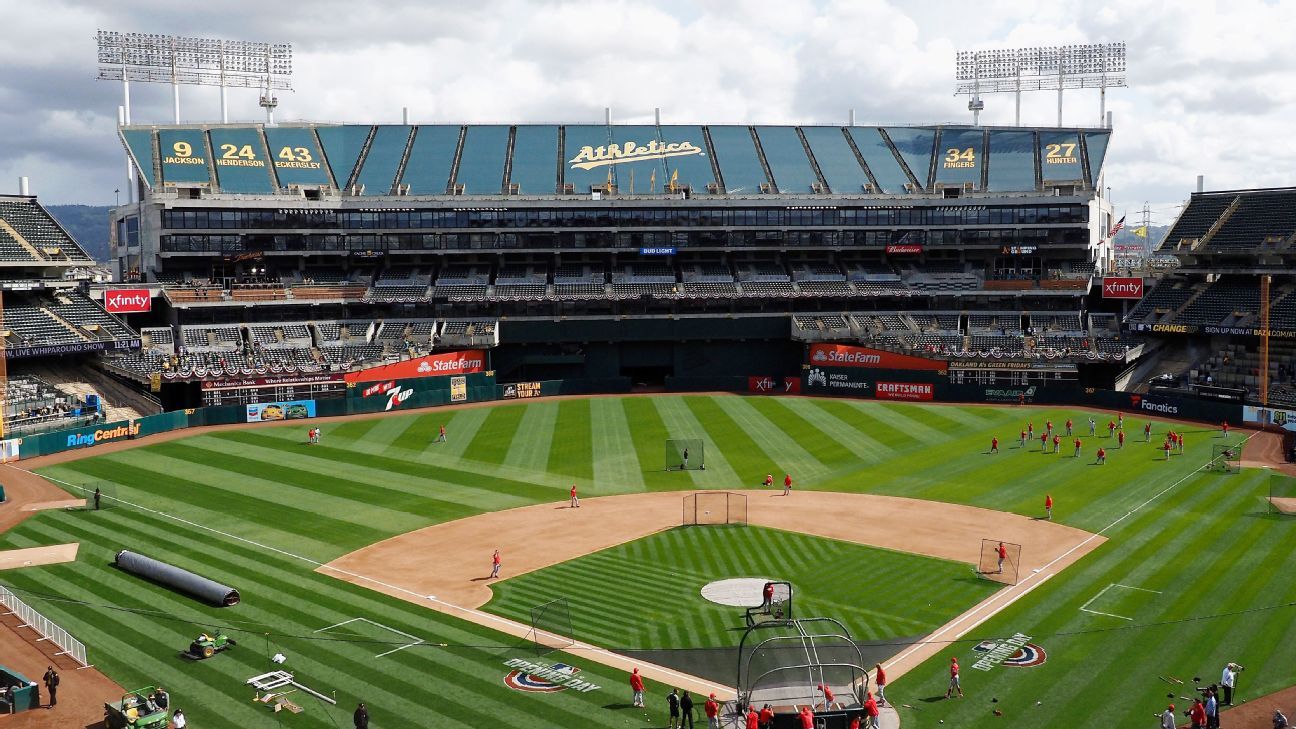 The Oakland Athletics will start exploring the possibility of relocating with the blessing of Major League Baseball, a move that could put pressure on local government officials to greenlight a new stadium project that has spent years in limbo, sources familiar with the situation told ESPN.

The A’s, who have played in Oakland since 1968, have prioritized building a waterfront stadium in downtown Oakland at the Howard Terminal site. But after years of failed stadium plans — and weeks after the organization asked for the city council to vote on the $12 billion mixed-use development before its late-July summer recess — the long-anticipated specter of the A’s looking into relocation on Tuesday became a reality.

“The future success of the A’s depends on a new ballpark,” A’s owner John Fisher said in a statement. “Oakland is a great baseball town, and we will continue to pursue our waterfront ballpark project. We will also follow MLB’s direction to explore other markets.”

The A’s are the lone remaining major professional sports team in Oakland after the NBA’s Golden State Warriors moved across the bay to San Francisco and the Raiders left for Las Vegas. Their pursuit of a new stadium to replace the now-55-year-old RingCentral Coliseum has included multiple sites in Oakland, dalliances with Fremont and San Jose, and two decades without a groundbreaking.

The Howard Terminal project — in which the A’s have proposed privately funding a $1 billion stadium and spending more on a development that would include 3,000 units of affordable housing, office and retail space, and a hotel — is the latest effort and has been seen as the likeliest to succeed.

After the A’s outlined proposal, which the organization said would include $450 million in community benefits, $955 million in general-fund revenues and an $855 million commitment from the city for infrastructure improvements, a spokesman in the mayor’s office said in a late-April statement: “The City is willing to bear its resources to help make this vision a reality; however, today’s proposal from the A’s appears to request public investment at the high end of projects of this type nationwide.”

The office of Oakland mayor Libby Schaaf did not return messages seeking comment.

The Athletics’ lease at RingCentral Coliseum runs through 2024 — and rebuilding at the coliseum site, seen by some as a possibility, “is not a viable option for the future vision of baseball,” the league said in a statement.

“MLB is concerned with the rate of progress on the A’s new ballpark effort with local officials and other stakeholders in Oakland,” the statement said. “The A’s have worked very hard to advance a new ballpark in downtown Oakland for the last four years, investing significant resources while facing multiple roadblocks. We know they remain deeply committed to succeeding in Oakland, and with two other sports franchises recently leaving the community, their commitment to Oakland is now more important than ever.

“The Oakland Coliseum site is not a viable option for the future vision of baseball. We have instructed the Athletics to begin to explore other markets while they continue to pursue a waterfront ballpark in Oakland. The Athletics need a new ballpark to remain competitive, so it is now in our best interest to also consider other markets.”

While MLB has been loath to expand, multiple cities have publicly expressed interest in a franchise. The likeliest possibility if the A’s do pursue relocation would be Las Vegas, which has found success with the Raiders and the NHL’s Golden Knights, but commissioner Rob Manfred has in the past also cited Portland, Vancouver, Nashville, Charlotte and Montreal as potential expansion sites for franchises.