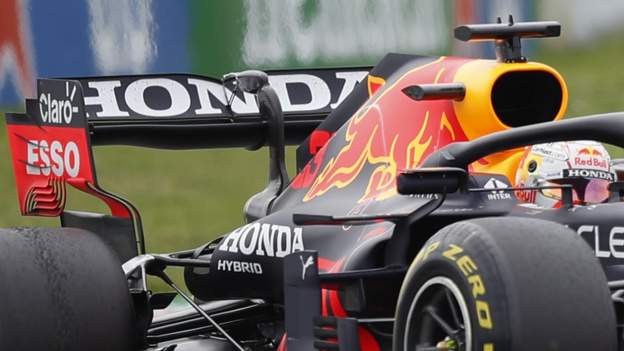 Formula 1’s governing body has launched a clampdown on flexible rear wings amid suspicions teams are bending the rules.

The governing body has written to teams saying it had “become aware” some rear wings passed tests but had “excessive deflections while cars are in motion”.

The FIA has told teams it will introduce new load-deflection tests from 15 June.

In addition to new, more targeted static tests, the FIA plans to use on-board cameras to monitor the behaviour of wings while cars are in motion in an attempt to spot any excessive movement of bodywork.

Teams will be required to put a series of markings on their wings to facilitate this process.

This is a ban on so-called ‘moveable aerodynamic devices’, which has been in place for many years.

But it is a difficult area of the rules because all surfaces flex under load to some degree, and historically some teams have tried to exploit this in search of an aerodynamic advantage.

If a wing or other bodywork part can be made to deflect or rotate in relation to others above a certain speed, it can reduce drag on the straights and make the car faster. The bodywork would then snap back into optimum downforce-producing position before the corners.

FIA single-seater technical head Nikolas Tombazis wrote in a note to teams that the deformations the FIA was referring to “can have a significant influence on a car’s aerodynamic performance and hence could be deemed to contravene the provisions of article 3.8”.

He did not name teams or give specific examples of wing behaviour.

“We will be looking out for any anomalous behaviour of the deformation of the rear wing,” said Tombazis.

“In particular, we will not tolerate any persistent out-of-plane deformation that may be contrived to circumvent the symmetrical loading applied in the load deflection tests.

“Should we observe any characteristics that indicate exploitation of this area, we will introduce further load deflection tests as necessary.”

Teams are being given a month to comply with the new tests so they have enough time to strengthen their wings if necessary.

There will be a tolerance of 20% built into the test in the first month of its operation.

Red Bull team principal Christian Horner said at the Spanish Grand Prix that Toto Wolff, his opposite number at Mercedes, had spoken to him on the issue.

Horner insisted his car complied with the regulations, saying: “The car’s scrutineered thoroughly and there are pull-back tests, all kinds of tests it has to pass,” he said. “The FIA are completely happy it has passed all the tests that are pretty stringent.

“I was surprised to see his comments, but it is something Toto has mentioned to me previously. So I doubt it was Lewis’ opinion. It probably came from elsewhere.”

The first race at which the new tests will come into force is the French Grand Prix on 25-27 June.

Before then, F1 is scheduled to race in Monaco on 20-23 May, Azerbaijan on 4-6 June and Turkey on 11-13 June, although the Istanbul race is in doubt following a surge in coronavirus cases in the country.