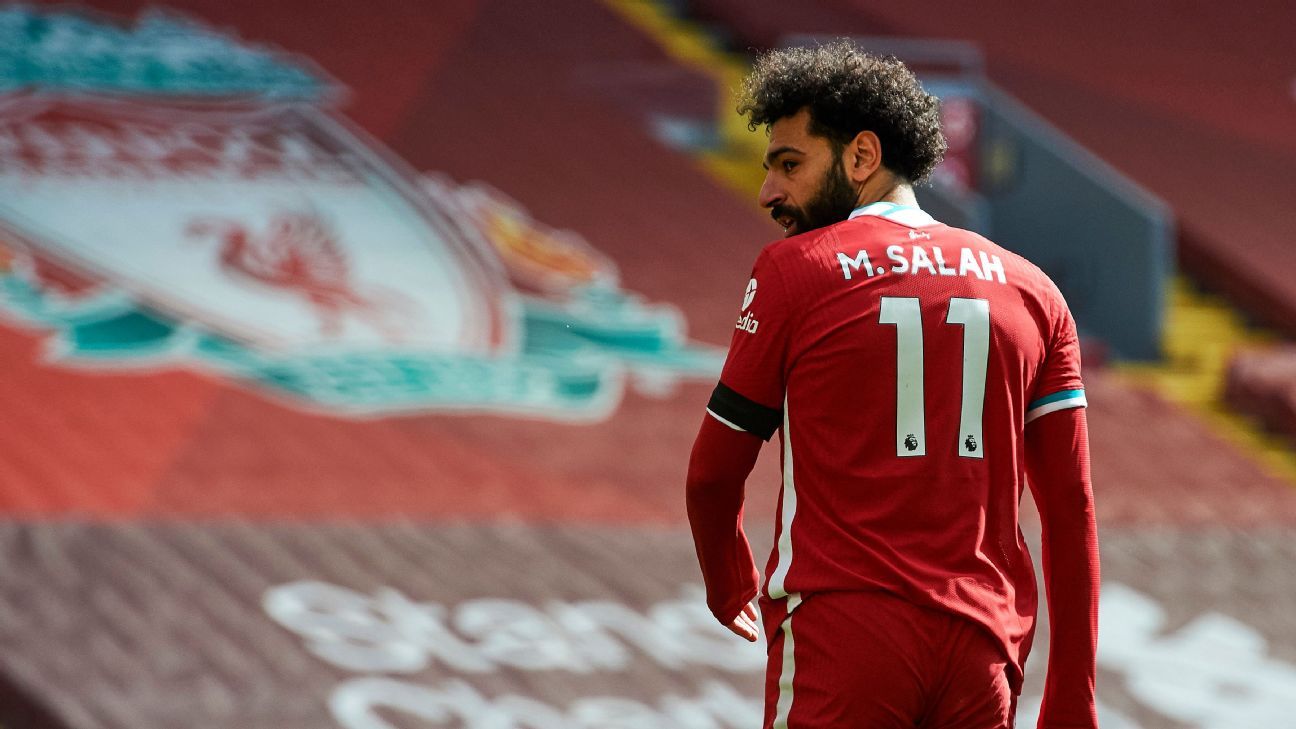 PSG look to Salah as Mbappe Plan B

As Paris Saint-Germain await a response from Kylian Mbappe on whether to accept the club’s offer to extend his deal beyond 2022 or leave the Ligue 1 giants this summer, sporting director Leonardo has a list of potential replacements which includes Liverpool forward Mohamed Salah, sources have told ESPN.

Salah, 28, has two years left on his contract and has 21 goals and four assists in 33 Premier League matches this season.

However, having been at Anfield for four years, PSG are hoping that the Egypt international would be open to a new chapter in his career, particularly if Liverpool fail to qualify for the Champions League next season.

Salah, who was signed for an initial €42 million from Roma in the summer of 2017 and has improved under manager Jurgen Klopp, recently said the club have not approached him for a new deal.

However, Klopp has also said previously that he did not want any of his front three (Salah, Sadio Mane and Roberto Firmino) to leave in the summer.

Although it is widely known that PSG’s new manager Mauricio Pochettino is a fan of Salah, it is unlikely that the Reds will consider anything less than €80m for him. — Julien Laurens

Manchester United believe they lead the chase to sign Jadon Sancho this summer if they can agree a fee with Borussia Dortmund, having overcome hurdles including personal terms and agent fees a year ago, sources have told ESPN.

Finding a broad agreement with Sancho and his representatives proved a stumbling block during the last summer transfer window with significant progress not made until early September.

However, sources have told ESPN that United hope those talks will give the club a head start if the 21-year-old leaves the German side ahead of next season.

There is a belief at Old Trafford that Dortmund are willing to let Sancho leave this summer and that the asking price will be significantly lower than the €120m demanded 12 months ago. Sources have told ESPN that Sancho remains keen to return to the Premier League after four seasons in Germany. Liverpool and Chelsea have also been linked with the former Manchester City youngster.

United are also interested in Dortmund striker Erling Haaland and Tottenham’s Harry Kane, although there is feeling the need to sign a centre-forward has been reduced by 34-year-old Edinson Cavani‘s decision to sign a one-year contract extension.

Sources have told ESPN that there is a belief that Haaland, in particular, will be more attainable next summer (when his €75m release clause kicks in) rather than at the end of the 2020-21 campaign. — Rob Dawson

Jadon Sancho says he is happy at Borussia Dortmund, but is unsure about where his future lies.

Porto will stage the Champions League final between Manchester City and Chelsea on May 29, however sources told ESPN that the Estadio do Dragao was UEFA’s third choice of the three options available to replace Istanbul’s Ataturk Stadium as the host venue.

The UK government has placed Turkey on its travel red list following a surge of COVID-19 cases — a move which would require all travellers, without exception, to spend 10 days in quarantine at an airport hotel upon their return — which forced UEFA to move the Champions League final from Istanbul for a second successive year. Last season’s final was held in Lisbon’s Estadio da Luz due to the coronavirus pandemic.

With two English clubs contesting the final, UEFA had been keen to move the game to London’s Wembley Stadium to ensure domestic supporters could attend without incurring travel costs. But despite initially offering its support to the game being staged in London, the UK government’s refusal to exempt up to 2,000 UEFA staff, sponsors and international broadcasters from a 10-day quarantine period forced European football’s governing body to take the game to Portugal, which is on the UK green list and open to travel between the two countries.

Lisbon had been identified as UEFA’s favoured option due to travel links to the city, the availability of two stadiums — Estadio da Luz and Sporting’s Estadio Jose Alvalade — and the number of hotels and hostels there.

But sources have said that internal politics within the Portuguese Football Federation (FPF) led to Porto being pushed, and selected, as the host venue. Domestic sensitivities in Portugal prompted the FPF to back Porto in order to avoid rivalries being inflamed by Lisbon hosting the final for a second consecutive year.

There was also a determination that Porto should be compensated for having lost hosting rights to the 2020 UEFA Super Cup, which was eventually held in Budapest because of the COVID-19 situation in Portugal last September. — Mark Ogden

– How Ajax melted down their trophy to share it with fans
– FA Cup final: Chelsea, Leicester clash at Wembley. Who will win?

Gab and Juls discuss the news of the Champions League final being moved from Istanbul to Porto.

Lille manager Christophe Galtier could walk away from the Ligue 1 title-chasers this summer, with sources telling ESPN he is keen to manage in England.

French sides Lyon and Nice are keen to hire Galtier — whose side lead PSG at the top of Ligue 1 by three points, with two games left to play — with former Dortmund boss Lucien Favre or ex-PSG and France manager Laurent Blanc potentially lined up to replace him at Lille.

Galtier’s move could be one of up to 13 managerial changes in Ligue 1 in the coming weeks, which would set a new record in the division.

Nice, Bordeaux, St Etienne and Nantes could have also have new face in the dugout — as could Reims, Strasbourg, Nimes, Montpellier, Lorient, Angers and Brest.

At Lyon, chairman Jean-Michel Aulas and sporting director Juninho have identified a number of names to replace Rudi Garcia such as Patrick Vieira, Marcelo Gallardo and Blanc, as well as Roberto De Zerbi and Paulo Fonseca.

Fonseca, who will be replaced by Jose Mourinho at Roma in the summer, is first-choice, sources have told ESPN. — Julien Laurens

Italian Serie B side Salernitana’s end to the season was marred by disgrace and controversy despite earning a first promotion back to the top flight since 1998.

Going into their final match of the campaign away to Pescara, Salernitana knew a win would confirm their return to Serie A for the first time in 23 years.

The night before match, the daughter of Pescara boss Gianluca Grassadonia — whose family reside in Salerno — was physically intimidated by a group of Salernitana supporters. Grassadonia’s wife explained via her social media that her daughter, who “recently turned 18, was threatened and assaulted with pushes and kicks until her father got the message.” She added: “Either they lose or he can no longer return home.” She finished her post saying: “Our life will continue well away from Salerno.”

Before Monday’s match — which Salernitana won 3-0 to pip Monza to second place behind Empoli and the final promotion place, all players, staff and directors lined up to shake Grassadonia’s hand as a show of solidarity.

“I want to thank everyone for their closeness and I assure you, Salerno, that this incident will not ruin an entire city,” Grassadonia said after the match. — Andrew Cesare Richardson

Real Madrid legend Raul Gonzalez has led the club’s B-team Castilla to the promotion playoffs to Spain’s Second Division with a no-nonsense disciplinary approach that has seen designer bags and fancy headphones banned among the squad.

Raul, who is Madrid’s all-time record appearance holder and second top scorer behind Cristiano Ronaldo after 16 years at the club as a player, took over as Castilla coach in 2019.

He has implemented a strict regime aimed at making sure a young squad, with an average age of 19, keep their feet on the ground while playing against semi-professional or amateur opponents in Segunda B — the third tier of Spanish football.

Branded washbags and rucksacks are forbidden, as are the outsized, expensive headphones usually favoured by players, although Apple AirPods are permitted.

Raul’s first season in charge of Castilla was curtailed when the 2019-20 campaign was brought to a premature end by the COVID-19 pandemic. This year they have impressed, with a number of youngsters such as Sergio Arribas, Antonio Blanco, Marvin Park and Miguel Gutierrez doing sufficiently well to earn regular first-team minutes.

Castilla will play UD Ibiza this Sunday in the first stage of the promotion playoffs, with another round to follow if successful, having last featured at Second Division level in 2014.

Raul is one of the leading contenders to replace former teammate Zinedine Zidane in charge of Madrid’s first team if he decides to move on this summer. — Alex Kirkland

The battle for No. 10 at Arsenal

Mesut Ozil’s departure from Arsenal in January has left the coveted No. 10 shirt vacant and sources have told ESPN that several players have requested to switch to No. 10 next season, including No. 9 Alexandre Lacazette, who wore the shirt for his final four seasons at Lyon prior to joining the Gunners in 2017.

One source has told ESPN that Pierre-Emerick Aubameyang (who has No. 14 currently) has also shown an interest, although he is on record as stating his preferred numbers are seven and nine.

With Bukayo Saka recently occupying No 7, there is a chance Aubameyang may look to take the No. 9 shirt if Lacazette changes numbers or leaves the club — which remains a possibility with talks planned over his future at the end of the season.

Sources have also told ESPN that Emile Smith Rowe (No. 32) is in the running and may be offered the No. 10 as part of negotiations taking place over his contract extension, although it is unclear if he is part of the conversation at this stage.

Willian wore No. 10 at Chelsea and may want to switch from No. 12, but no final decision will be taken until after the end of the season. It is possible the shirt is kept back for a new signing or possibly if Martin Odegaard extends his loan stay from Real Madrid. — James Olley.