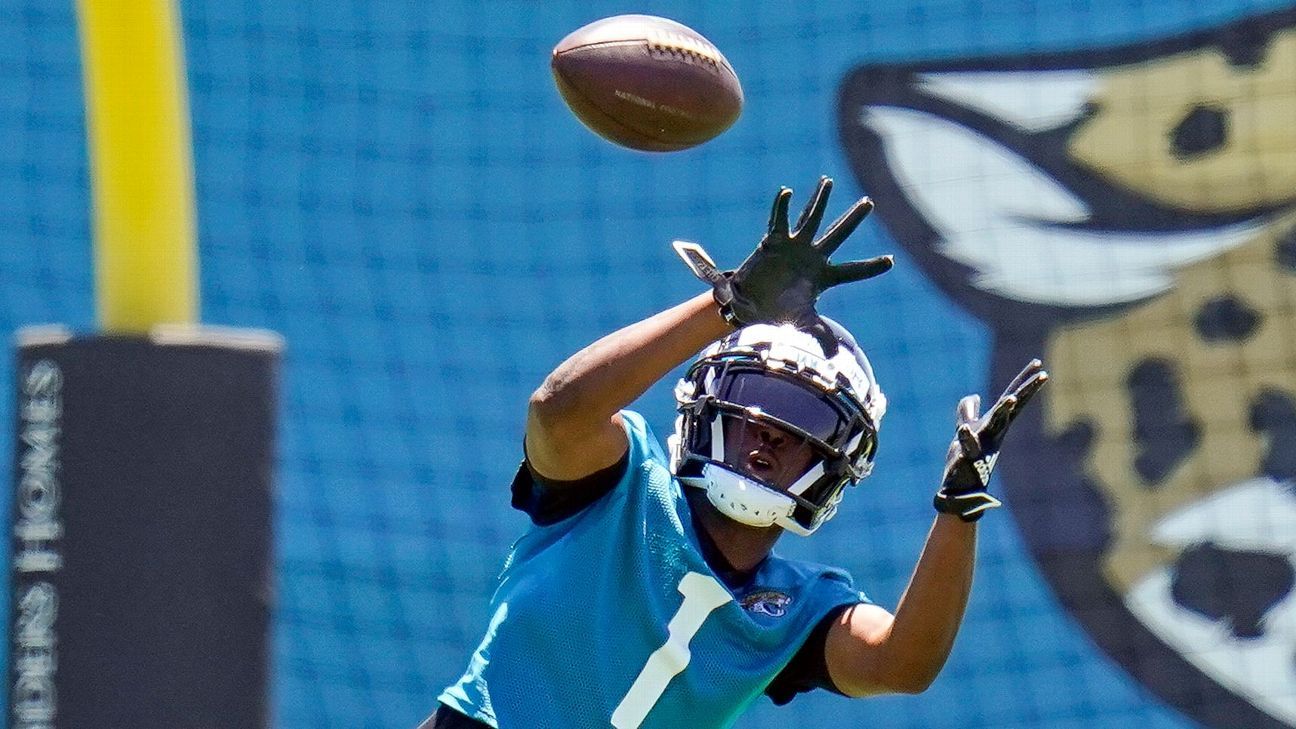 JACKSONVILLE, Fla. — Trevor Lawrence is getting a lighter workload while Travis Etienne is getting as much as he can handle … at another position.

The Jacksonville Jaguars have had Etienne taking the majority of his reps at receiver during the first two days of the team’s rookie minicamp to begin the process of turning the ACC’s all-time leading rusher into a player who can line up anywhere — in the backfield, wide, or in the slot.

Meyer finalized the plan in his mind the moment the Jaguars selected Etienne 25th overall last month, and Etienne was all in when Meyer told him the next day that once he got to Jacksonville he would spend most of his time learning the fundamentals of playing receiver.

One of the reasons Etienne returned to Clemson for his senior season was to show that he could be a reliable pass-catcher. In addition to rushing for an ACC-record 4,952 yards and 70 TDs in four seasons for the Tigers, Etienne also caught 102 passes for 1,155 yards and eight TDs — including 48 receptions for 588 yards and two TDs in 2020.

Meyer’s hope is Etienne can turn into another Percy Harvin, who was one of the country’s most dynamic players when he played for Meyer at Florida. Harvin lined up in the backfield, in the slot and at receiver, and ran for 1,852 yards with 19 touchdowns and caught 133 passes for 1,929 yards with 13 touchdowns in three seasons for the Gators.

“I’m glad he’s getting work that, getting those reps right now,” Lawrence said of Etienne. “He’s just a dynamic player. He can do a lot of different things but that’s something that he’s not very used to. At Clemson he was pretty much in the backfield all the time. He ran a lot of routes out of the backfield but splitting out wide is something he hasn’t done a lot.

“It’s cool seeing him out there, working, learning something new. Just to see the improvements he makes every day is really cool.”

It’s unclear how much work Etienne would have gotten at running back during rookie minicamp anyway because of the restricted workload the team placed on Lawrence as he returns from offseason labrum surgery in his left shoulder. He was limited to 30-40 throws and Meyer also said the Jaguars didn’t want him taking snaps or handing off to ensure the shoulder doesn’t get bumped or battered.

“We’re just worried about any chance of that arm getting jammed right now,” Meyer said. “They told me the labrum has healed after three months, which it’s been three months, but we can’t have a guy on the ground. That’s the biggest thing: We’ve got to keep people away from him.

“The pitch count’s not as big as the fact of keeping him upright.”

Meyer said Lawrence should be fully cleared in time for the beginning of training camp in late July. Lawrence said the shoulder feels great and he has full range of motion, though the team is also limiting how much weight he can lift. He said he’s eager to go back to a full load of throws in practice.

“Obviously that’s what I want to do right now but I know there’s a right way to do things and to be careful and put myself in the best position so I’m trusting that,” Lawrence said. “That’s the medical staff, the coaches, everyone’s on the same page. We’ve got a good plan. We know what we’re doing and I’m just trusting that — and it won’t be long before I’m full go.”

It also doesn’t look like it’ll be long before the Jaguars sign Tim Tebow, either. Meyer said the staff will meet Sunday and determine if they want to sign the former quarterback to play tight end.

“I imagine the decision’s going to be soon,” Meyer said. “… All our focus is on [rookies] right now.”

Rookie defensive tackle Jay Tufele did not participate because Meyer said Tufele had a positive and negative COVID-19 test and the team opted to hold him out, though he added Tufele could return for the final day of minicamp on Sunday. Cornerback Tyson Campbell suffered a minor hamstring strain on Friday and was limited on Saturday.